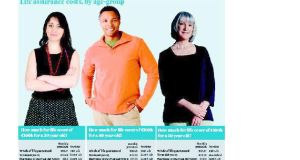 It’s the ultimate protection. No matter when you die, whether you are 40 or 95, the financial health of your family will be secure thanks to a life insurance policy that lasts as long as you live. But there’s one caveat – you have to keep up the repayments.

As some holders of reviewable whole-of-life policies can attest however, this is not always possible, as under such policies, some policyholders have seen the cost of their premiums rise by several hundred per cent.

Issues around whole-of-life cover have also brought into sharp focus the appropriateness of the Financial Ombudsman’s six-year rule, which only allows the office to investigate complaints related to mis-selling in the six years prior to complaint.

? Unlike mortgage protection for example, which only protects the amount outstanding on your mortgage, or term life assurance, which lasts for a specified time, such as 20 or 30 years, a whole-of-life policy protects you as long as you keep making the premiums.

For reasons such as this, it can be difficult to obtain, with most insurers applying an upper age limit of 75, and you have to be in good health with a good medical history to qualify for such cover.

? Life cover is designed to protect an income in the event of death so, for most people, whole-of-life cover is unnecessary. It can be useful to provide for funeral or inheritance tax issues, or for someone who wants to provide for a disabled child when they’re gone, but otherwise

its use is limited.

? Unsurprisingly, given the scope of its cover, whole-of-life insurance tends to be very expensive. As the table above shows, a 30 year old will pay six times more for guaranteed whole-of-life cover (€61 per month) than they would for mortgage protection (€10 per month).

One way of offsetting this expense is to opt for a reviewable policy, which tends to be cheaper when you’re younger, and get more expensive as you age. However, policyholders need to think carefully before opting for such a policy.

There are two types of policies available on the Irish market: guaranteed and reviewable. Under a guaranteed policy, your cover will stay static and your premiums won’t change, thus guaranteeing you the indicated payout when you die.

Under a reviewable policy, however, premiums are subject to review, and the amount you pay each month can be increased or the cover reduced.

These policies first became popular back in the 1980s, and had the appeal of offering those looking to get life cover the chance of saving some money also.

The structure of such a policy means that your premiums are invested in unit-linked funds, with the principle being that your money grows at a certain rate, thereby providing an element of protection to the life assurer, and gives you a surrender value in the event that you cancel your policy.

“They weren’t designed to make a lot of money; they were a buffer for customers when reviews came around,” says Lucy Rochford, head of life and SME sales with Chill Insurance, noting that performance can be further hit by high allocation rates.

While they’re no longer actively marketed by life companies, you can still purchase such policies.

Reviewable policy If you pay a premium of €100 a month on a reviewable policy, typically €50 of this will go into a unit-linked investment fund, with a further €50 used for the life cover part of the policy. However, this is prone to change as you age, which means that a higher proportion will be used for life cover the older you get.

The savings element of the fund offers a little lump sum should you wish to cancel the policy, or a buffer for the life company to dip into once you age before they start hiking up your premiums as you get older.

“When they were designed they weren’t a bad policy, as inflation was about 20 per cent and managed funds were returning about the same,” notes Nick McGowan, director of Tullamore-based McGowan Insurances (lion.ie), adding, “if the funds had kept growing, there would never have been a need for a review”.

However, as with all fund investments, the value is not guaranteed, which means that it may not grow by enough to pay for your life insurance throughout your life.

Indeed for many policyholders, plunging markets put paid to this and, while markets have been soaring since the crash, many funds are only now recovering what they once lost.

This means that when a policy is due for review, many clients, who may now be 30 years older than when they first purchased the policy, are finding their premiums have become unsustainable.

Typically, a premium is up for review after 10 years, and every five years thereafter. Once you turn 60, the review happens annually.

Of course after your first review, you may only be in your 30s, so the policy is unlikely to increase. Once you hit 60, however, the cost will likely jump substantially, which is what is now hurting so many people, who may have first purchased the policy some 30 years ago.

“That’s the problem customers are in now; the premiums are going up and up but, if they don’t pay the increase, then the cover goes down and down,” says Rochford.

But then this year the client got a statement notifying them that their premium had jumped by a whopping 612 per cent, to €534 a month. If the client won’t pay the increased premium, the life company will cut cover back to €15,000.

It should be noted he has another client, in his 40s, who is holding fast to his reviewable whole-of-life policy, as through it he has built up a lump-sum of almost €10,000, while also benefiting from the peace of mind that such cover can bring.

The danger is his premiums will start to rise substantially at an age when he might find it difficult to find alternative cover.

you can’t keep pace with the increase in repayments, it may be time for a rethink.

The first step, says McGowan, is to consider whether you need such cover any more. If you have no dependents or if you have life cover elsewhere, through your job for example, you may no longer need the cover.

If this is the case, you can cancel the life cover and convert it into a simple savings policy, if it stands up on its own as an investment. If the allocation rate/charges are too high, it may make more sense to cash it in and seek an alternative investment. If you do need cover, it’s probably time to shop around and look for another policy.

However, as Rochford remarks, at this point you’re older and you may have health issues, which can make it difficult to get alternative cover.

A further complication can be if you have a mortgage. If you are unable to assign a new life policy to the mortgage, the life company won’t be able to cancel it which means you’ll have to stick with your reviewable policy.

Making a decision can be further complicated by the likelihood of the consumer developing a critical illness. As McGowan notes, reviewable whole-of-life policies typically also have a critical illness element – and policies written in the 1980s/1990s typically have a much broader definition of serious illnesses than those on sale today.

“It’s a tough one to advise [someone] to move, as the new policy will not be as comprehensive as the one they took away,” he says.

Can I complain if

premium jumps? If you feel that you were mis-sold a reviewable policy, you may have grounds for complaint.

According to the acting Financial Services Ombudsman Jacqueline McCrum, if, for example, it was alleged that incorrect amounts were deducted as payment within the previous six years then “certainly that conduct could be and is investigated by this office”.

However, under the six-year time limit that applies, the ombudsman cannot investigate mis-selling, as this happened at the time of the sale of such a policy, which was sold, typically during the 1980s and 1990s.

Indeed statistics show that, since 2010, there have been 836 complaints (it is not clear out of how many such policies sold) with respect to whole-of-life insurance – but none has gone in favour of the consumer on the grounds of mis-selling.

McCrum says some of these complaints may have been partially upheld, due to issues surrounding reviews, which would have taken place within the six-year timeframe.

Some argue that such policies should be allowed to be investigated for mis-selling. Fianna Fáil finance spokesman Michael McGrath has called on the Central Bank to investigate alleged mis-selling.

“The fact that no adverse findings have been made against companies selling whole-of-life assurance, despite concerns about the operation of the sector, indicates a potentially serious gap in the current legislative powers of the Financial Services Ombudsman [six-year rule],” he argues, suggesting a better rule may be that a person has three years to lodge a complaint with the ombudsman from the time they become aware of a problem with a product. In the UK, where no time limit is in place, many consumers have had their cases investigated – and the outcome has been favourable to them.

Indeed according to a spokeswoman for the UK financial ombudsman, from April to December 2014, the office received 1,963 new complaints about whole-of-life policies – and it found in favour of the consumer in approximately 24 per cent of these cases.

It has set out a number of reasons why you may have grounds for a complaint. It says that it won’t uphold a complaint just because the consumer was asked for more money – or was told they will have to accept a reduced sum assured. It will, however, consider doing so if the product didn’t meet the consumer’s needs; if the underlying fund was too risky; if they were not informed about the review process; or if the review was not undertaken at the right time.