Is gut feeling really the secret key to trading success? 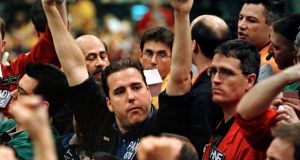 Going with your gut: “The results of the study indicate the market ‘selects’, Darwinian-style, ‘for traders with good gut feelings’, with those lacking in this department ‘eliminated’ over time.” File photograph: Scott Olson/Reuters

Financial institutions increasingly use computer algorithms to navigate global markets, but it seems there is still a role for traders who rely on a more old-fashioned approach to choosing positions: gut feeling.

So says former Goldman Sachs trader and neuroscientist John Coates, co-author of a recent well-publicised University of Cambridge study which found that traders tend to be more skilled than most when it comes to reading their gut feelings. That seems to be a valuable skill for highly active traders; according to Coates, the better they are at identifying gut feelings, the more likely they are to make money in the markets.

“Traders in the financial world often speak of the importance of gut feelings for choosing profitable trades,” the study says. “By this they mean that subtle physiological changes in their bodies provide cues helping them rapidly select from a range of possible trades the one that just ‘feels right’.”

This “feels right” sensation was familiar to Coates from his own trading days. To confirm his thesis, he and his fellow researchers used heart-rate monitoring equipment to analyse the heartbeat detection skills of 18 traders at a mid-sized London hedge fund. Without touching any pulse points, the traders attempted to count their heartbeats over various periods of time, as did a control group of 48 people not from the trading population.

The traders were much more attuned to their own physiology, as evidenced by substantially more accurate heartbeat estimations. Furthermore, this same trait was correlated with profitability and career longevity: the traders most adept at detecting their heart rate tended to be more successful in their trading and more likely to survive in the financial markets for longer periods.

The results indicate the market “selects”, Darwinian-style, “for traders with good gut feelings”, with those lacking in this department “eliminated” over time. It seems that “signals from the body – the gut feelings of financial lore – contribute to success in the markets”.

Some caveats are necessary. First, the sample size of 18 traders is a very small one, so it’s difficult to generalise these results with any great confidence. Second, the researchers admit that correlation is not causation. Some research suggests that heartbeat detection ability increases during stress; the stressful nature of high-frequency trading may make traders more sensitive to their heart rates.

Alternatively, luck may be a factor. A lower body mass index and a lower heart rate are also correlated with heartbeat detection ability; more profitably, traders may have more time to dedicate to fitness activities as their career progresses, resulting in an improvement in their heartbeat detection ability. In this scenario, trading success is followed by improved physiological fitness, which then drives increased sensitivity to gut feelings.

Certainly, some financial professionals are not swayed by the research. “Massively over-reaching extrapolation in this,” tweeted behavioural finance expert Dr Greg Davies. Fellow behavioural finance expert and Credit Suisse strategist Michael Mauboussin agreed with Davies, while Josh Brown of Ritholtz Wealth Management scoffed that the “trust your gut” theory was “the worst investment advice of all time”.

Bechara and Damasio developed the Iowa gambling task (IGT), a widely used risk-taking game that involves choosing cards from four decks of cards. Two “bad” decks involve higher pay-offs on wins but also larger penalties for losses, resulting in overall returns being negative. The two “good” decks have smaller pay-offs for wins but also smaller penalties for losses; over time, this will result in gains.

In Bechara and Damasio’s experiments, healthy participants learned over time to stick to the good decks. Early on in the task, participants displayed subtle physiological changes that betrayed a stress reaction – for example, skin response – when they reached for the bad decks. This skin response became more consistent as the game progressed, guiding participants away from the bad decks, but they were not yet consciously aware of why they were avoiding them – they simply had a feeling the decks were “funny”.

Different results were found when experiments involve brain-damaged people who do not receive these same “somatic markers”. They tended to choose the riskier decks and therefore lost money; although perfectly intelligent, the absence of physiological arousal hurt their decision-making ability.

“The reason he changes his position on the market or whatever is because his back starts killing him,” his son, Robert, once said. “It has nothing to do with reason. He literally goes into a spasm, and it’s this early warning sign.”

Soros himself admits to relying on “animal instincts”, saying he often viewed acute pain as “a signal that there was something wrong in my portfolio”.

If backache, perspiration and a racing heart can guide traders as to when something may be amiss, there are other times when things feel “just right”, as John Coates puts it.

This is echoed by Traderfeed blogger and psychologist Dr Brett Steenbarger. In a 2010 blog post, Steenbarger relates how he had “an unusually strong intuition that the market would close strong”, not long before indices broke to new highs. These intuitive moments are rare but “invariably on the mark”, a “kind of ‘Aha!’ feeling”. These intuitions, he says, never come when he is looking for market ideas; the pattern has to come to him.

Steenbarger, who has lauded the Cambridge study on gut feeling and trading success, has long argued against the idea that emotions are at the root of trading problems. Rather, emotional distress tends to result when traders make bad decisions, whether by taking excessively large positions or by paying insufficient attention to entry and exit points.

In another old blog post, he suggests that “the greatest value of such disciplines as meditation, relaxation training and biofeedback is to help people maintain a clear mind, so that they do not override and obscure the somatic markers that are necessary for sound decision-making”.

Traders, he says, “would be better served by disciplines that enable them to be accurate observers of their feelings than prescriptions for squelching those feelings”.

It should be remembered, of course, that the research regarding the importance and value of gut feelings pertains to highly active and experienced traders, not to investors. A wealth of research confirms that investors are generally better off ignoring their gut instincts and sticking to a disciplined, pre-determined plan. To say otherwise would, as Josh Brown put it, probably be “the worst investment advice of all time”.

Second, the research does not imply that wannabe traders should throw caution to the wind and bet big on every gut feeling they get.

“Nothing substitutes for a reasoned understanding of how markets behave and a disciplined execution of trades that reflect that understanding,” Steenbarger says in a recent blog post. “Gut feel without understanding leads to the trading of randomness.”

Just as George Soros’s “animal instincts” have been honed by a lifetime of experience in the markets, the ‘Aha!’ feeling reported by Steenbarger and others is likely guided by pattern recognition skills learned following years of demanding trading analysis and experience.

“I agree that intuition is important,” says Josh Brown. “I disagree that a majority of people should trust theirs.”

Investors may need to get used to market flash crashes.