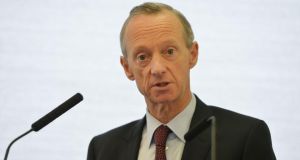 Vincent Crowley, the former chief executive of Independent News & Media (INM), has been appointed chairman of the National Newspapers of Ireland group.

Mr Crowley, who formally stepped down from the INM position in May, succeeds Matt Dempsey, the chairman of the Irish Farmers Journal, in the role.

Before being appointed chief executive of INM in 2012 following the exit of Gavin O’Reilly, Mr Crowley held a number of senior roles in the company.

In a statement, Mr Crowley said that “as the rapid evolution of the news media industry continues, so too do the challenges”, adding that he looked forward to working with his colleagues in the NNI “to meet these challenges to ensure the Irish newspaper industry, which employs thousands of people, remains strong and viable”.

Speaking at his final presentation of INM earnings in March, Mr Crowley talked up the future of print newspapers, despite multi-year slides in circulation revenues, noting that print newspapers remained “a very strong medium” and continued to be widely read.

“I think we, as an industry, need to be more bullish about talking about that... We collectively need to be much more positive about print, because we still deliver huge audiences, week in, week out,” he said at the time. “That’s not to be in denial about how people are consuming news through different channels.”

Since Mr Crowley’s departure, INM has been run by a sub-committee of chairman Leslie Buckley, as well as directors Triona Mullane, Allan Marshall and Terry Buckley. Mr Leslie Buckley indicated in June that a new chief executive would be appointed before the publication of the group’s interim results at the end of August.

It would be expected that as part of his new role in the NNI, Mr Crowley will be working alongside the new INM chief executive, as well as the heads of other Irish newspaper groups, to formulate industry-wide positions.

The NNI last month appointed Dara McMahon, a former Ulster Bank strategy director, as co-ordinator of the group, which represents the interests of 16 national and 25 regional newspapers. Ms McMahon previously worked for Diageo and is a board member of the Association of Advertisers in Ireland (AAI).

1 In six months we will be in the grip of a 1980s-style recession
2 Angela Merkel sweeps in to save the euro zone
3 Aer Lingus wants quarantine period axed to resume flights in July
4 Google facing $5bn lawsuit for tracking in ‘private’ mode
5 Deloitte expands into cloud computing with deal for DNM
6 More than 2m people use website that shows lockdown distance limits
7 Unemployment rate remains at near record 26.1% in May
8 Should my mam wait for house prices to drop before buying?
9 Pinterest seeks new office for Dublin EMEA headquarters expansion
10 Apple tax case: Four individual lawyers paid over €500,000 each
Real news has value SUBSCRIBE

Unemployment rate remains at near record 26.1% in May 11:52
Bank of England tells banks to get ready for no-deal Brexit 11:11
More than 2m people use website that shows lockdown distance limits 10:35
Angela Merkel sweeps in to save the euro zone 10:32
Google facing $5bn lawsuit for tracking in ‘private’ mode 09:51
Search executive
jobs on irishtimes.com