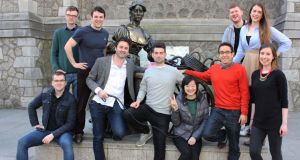 NewsWhip, a Dublin- and New York-based company that tracks and analyses content posted on social media, has received investment of more than $1.6 million (€1.5 million) from a number of backers including Tribal VC, the Associated Press and the AIB Seed Capital Fund.

The company plans to double its workforce to 30, adding 15 jobs across both its Dublin-based product research and development (R&D) team and its US-based business development team.

A “large portion” of the funds will be used in Dublin to develop the next iteration of the NewsWhip platform, which is designed to help clients “spot viral stories and events before they take off”.

“This funding round enables us to make the next step on our journey,” said NewsWhip chief executive and co-founder Paul Quigley.

The company, founded in 2011, previously raised $1.1 million in funding in 2013, with supporters including AIB and Enterprise Ireland.

Its social media analysis platform, Spike, which it describes as “a human signal of what matters in the digital noise”, has been used by news media groups such as BuzzFeed, Bloomberg, the Daily Mail, the BBC, the Guardian and new investor Associated Press.

“We can track and predict the virality of content in 40 languages based on how fast each story is getting traction,” said chief technology officer and co-founder Andrew Mullaney. Future versions of the Spike platform “will add more intelligence to that data”, he said.