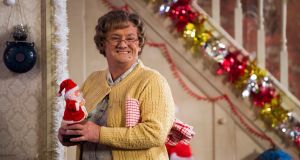 The Mrs Brown’s Boys Christmas special was the most-watched television programme in Ireland this Christmas.

Mrs Brown’s Boys: Mammy’s Mummy, in which a new “Rory” was unveiled after plastic surgery, attracted an average of 695,000 on RTÉ One on Christmas Day. This was 42 per cent of the people who were watching television at the time, the Nielsen / TAM Ireland ratings show.

The popularity of the comedy with Irish viewers mirrors its success in the UK, where it pulled in 6.8 million viewers to BBC One, making it second in the UK ratings only to the 7.6 million who watched the Queen’s Christmas Message.

Mrs Brown’s Boys, which is written by and stars Brendan O’Carroll, is likely to be one of a number of programmes to see its audience overtake that of the annual Queen Elizabeth broadcast in the consolidated ratings, which include any catch-up viewing that takes place within seven days.

By now something of a traditional festive ratings topper, the show is a BBC Scotland co-production with O’Carroll’s company Boc-Pix in association with RTÉ.

Elsewhere on Irish television, Angela’s Christmas, a new animation by Oscar-winning Brown Bag Films based on the writing of Frank McCourt, was watched by an average of 417,000 people on Christmas Eve. This represented a third of the audience watching television at the time.

Brooklyn, starring Saoirse Ronan, was the most popular film on Irish television. The RTÉ One premiere of the emigration-themed drama, adapted from the novel by Colm Tóibín, on Christmas night lured an average audience of 379,000, while Jurassic World brought in 306,000 viewers to RTÉ One on St Stephen’s Day.

The hour-long episode of Fair City on Christmas Day attracted an average of 310,000 viewers.

Some 307,000 people tuned into the atmospheric Carols from the Castle on RTÉ One on Christmas Eve, while a Christmas special with country singer Nathan Carter was watched by 293,000 people on St Stephen’s Day.

However, the most-watched music-themed programme on Irish television recently was Fairytale of New York, a documentary in which Shane MacGowan talked about the writing of the festive hit, which was watched by 461,000 people on December 21st.