London-based company said adjusted earnings before interest, tax, depreciation and amortisation fell 93 per cent in the first half 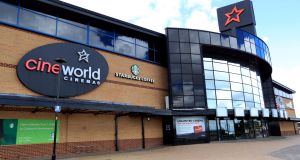 A Cineworld branch in the UK. Photograph: Mike Egerton/PA Wire

The world’s second-largest cinema chain is facing lockdowns and the prospect of film delays that could jeopardise its ability to meet the terms of its loans. It says raising money could be a way for it to weather the pandemic.

“All options are open,” deputy chief executive Israel Greidinger said in an interview Thursday. “It’s not that we need to raise billions of dollars - if we need to raise money, it will be raising an additional $200 million to $300 million.”

The London-based company said earlier adjusted earnings before interest, tax, depreciation and amortisation fell 93 per cent in the first half. It’s banking on a revival from box office takings from key releases such as the new James Bond film, currently scheduled for November.

However, hopes for moviegoing to return to normal are dimming as Cineworld’s key markets struggle to contain the coronavirus. Of its 778 sites, 200 remain closed in the US and six in Britain. A sharply rising infection rate in the UK. led Prime Minister Boris Johnson to tighten social distancing measures on Tuesday.

Options being assessed by the board include an extension of its revolving credit facility beyond its expiry in December, an additional term loan or an equity raise, the company said in its results statement.

In addition, a US court ruling last month allowing movie studios to buy theaters has “opened opportunities”, Greidinger said. The decision scrapped a ban that had been in place since 1948.

Cineworld said it will breach borrowing covenants in December unless it can negotiate waivers with its banks, and that it expects lenders to provide these. It has already taken other measures to ease its position, including the renegotiation of 200 leases.

The company has $3.6 billion of term loans and a $573.3 million revolving credit line. The latter’s terms include a leverage covenant triggered above 35 per cent utilisation and testing in June and December. Lenders waived testing in June. There are also terms related to net debt ratios.

The stock is currently the UK’s most-shorted, and the shares fell as much as 20 per cent in London on Thursday, putting the company at one-fifth of its January market value.

Israel and his brother Mooky, the company’s chief executive officer, own 20% of Cineworld through the family’s Global City Holdings. Greidinger said Covid-19 will eventually disappear, “and in that moment, I think that all these short people will start running away - so I suggest to them to run earlier.” - Bloomberg

1 How long can Government afford to keep State pension age at 66?
2 Guinness brings out a non-alcoholic version of the black stuff
3 Frank Fitzgibbon stepping down as Sunday Times editor
4 Galway’s Aerogen plays key role in Covid-19 therapies
5 Jobs, incomes, the deficit: how much will Level 5 cost us?
6 Google's incredible power is the result of decades of regulatory failure
7 Half of businesses plan to freeze pay next year
8 Paul Coulson plans record $1.8bn Ardagh investment
9 How much will a Covid-19 vaccine cost?
10 Irish start-up Wayflyer raises €7.8m in seed funding
Real news has value SUBSCRIBE