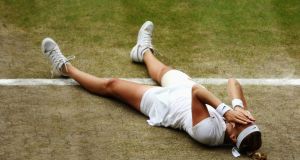 It’s the end of the “feall dúbailte” (double fault), the cúlbhuille (backhand) and the pointe an bhua (match point). TG4’s rights to show Wimbledon on Irish television, which the Irish language broadcaster first acquired in 2005, are now over after Setanta Sports decided it fancied some Centre Court action.

It’s 15-love (a cúig déag-a náid) to Setanta, which as well as signing a three-year deal with the All England Tennis Club has extended its deal with Roland Garros, home of the French Open, until 2019. The clay-court action from Paris serves up its first rallies this Sunday, while Wimbledon has been shifted forward in the calendar by one week from this year to June 29th, in a bid to give the top players a longer rest between Grand Slams.

Over the past year, Setanta has been investing in rights to events now just around the corner, such as the Republic of Ireland v England football friendly on June 7th and the next big Conor McGregor ultimate fighting championship (UFC) showdown in July.

Next month will also see it broadcast matches from the South American football tournament Copa América as well as the inaugural European Games from Azerbaijan. While Ireland may not have any high-ranking serve-and-volleyers to lure the patriotic viewer to London SW19, Katie Taylor will be leading the Irish bid for glory in Baku.

With the calendar free of major sporting events like the Olympics or football World Cup, it is warming up to be a relatively nice summer for Setanta.

1 How can I view my dead brother’s will if I’m not the executor?
2 Investors pile into property as turnover in build-to-rent sector reaches €2.54bn
3 Kerry’s Chinese sales set for 30% hit from coronavirus
4 Provisional liquidator appointed to Dublin engineering firm
5 Analyst doubles projection for Tesla shares to $1,200
6 Bursting of Tesla bubble a case of ‘not if, but when’
7 Bank of Ireland staff in line for 2.95% pay increase
8 Flutter’s planned merger with Stars gets informal approval in Australia
9 US reiterates opposition to Huawei equipment being used for Irish 5G
10 Finance Ireland plans stock market flotation in May
Real news has value SUBSCRIBE