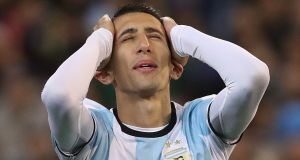 Angel Di Maria, the Argentinian football star who this week pleaded guilty to tax fraud in Spain, used the same two Irish companies as part of his image rights payments structure that have figured in the tax investigations of Cristiano Ronaldo and José Mourinho.

Mr Di Maria, who plays for Paris St Germain but faced investigation over his time at Real Madrid, received a one-year jail term, which is likely to be suspended, and agreed to pay fines and back taxes of €2 million.

Spanish prosecutors pursued him for evading taxes of €1.3 million on his image rights between 2012 and 2013.

Mr Di Maria transferred his image rights to Sunpex Corporation, a company in the tax haven of Panama. Sunpex then ceded his rights to Dublin companies, Multisports & Image Management (MIM) and Polaris Sports, according to the Spanish reports of the legal complaint against him.

The Irish companies then dealt directly with the companies that made payments to the footballer in return for using his image, before transferring much of the cash to Panama.

Polaris and MIM were both also used in the image rights structures employed by Mr Mourinho, when he was Real Madrid manager, and Mr Ronaldo, who is still the team’s star forward.

Commenting on the issue the European Union commissioner for economic affairs Pierre Mosovici said European soccer players make enough money to pay their taxes properly without resorting to “tricks” to reduce their obligations. He said players should be transparent about their finances as he criticised some of the elaborate financial structures that the sport’s top stars have set up to process their earnings.

He proposed imposing a legal obligation on players’ tax advisers and lawyers to explain their clients tax structures to national tax authorities. “All these soccer players get paid enough to not have to resort to fiscal tricks, if that’s proved,” he said. “I’m not going after professionals, I’m fighting against secrecy.”

The two Portuguese men, who are facing charges over alleged tax fraud in Spain, initially transferred their image rights to companies in the British Virgin Islands, before also ceding them to MIM and Polaris in Dublin.

Mr Mourinho and Mr Ronaldo both strongly deny having engaged in any wrongdoing in relation to their tax affairs. They, along with Mr Di Maria and several other footballers to face Spanish tax investigations, are clients of well-known agent Jorge Mendes.

Mr Mendes has close links to the Dublin tax advisory practice of accountants Moore Stephens. Andy Quinn, managing partner of Moore Stephens, sits on the boards of MIM and Polaris, which are registered at the address of the firm’s Dublin office.

Moore Stephens has previously said it “works to the highest professional standards ensuring compliance with all relevant accounting, tax, regulatory requirements and legislation”.

On Thursday, the firm said it “wishes to state that it has never advised or been engaged by Mr Cristiano Ronaldo, José Mourinho, Angel Di Maria or any other professional footballer”.

MIM has made similar statements that it complies with all tax rules. On Thursday, it said “it has never promoted or been involved in tax evasion, nor does it condone it”.

It added: “Any allegation of such practices by this company will not be tolerated.”

1 Why gift a son now if it eats into his tax-free inheritance threshold?
2 Flights abroad ban could last all summer
3 Government to avoid ‘cliff-edge’ on Covid-19 payment changes
4 Chris Johns: Economic self-harm is the root of populism
5 Home or car: what’s the best use of my savings?
6 Columbia Sportswear defies gloom with first Irish standalone shop
7 Why are markets booming when a crash is on the way?
8 UK expected to phase Huawei out of 5G network
9 French company Infravia to buy Mater Private
10 No free lunch on coronavirus cash payments
Real news has value SUBSCRIBE