AIB case against O’Reilly to go before Commercial Court 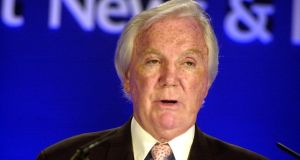 A case being taken by AIB against Sir Anthony O’Reilly in relation to his multimillion euro debts is listed for mention before the Commercial Court this morning.

The State-controlled bank is seeking a summary judgment against the one-time billionaire and two of his investment vehicles, Indexia Holdings and Brookside Investments

Sir Anthony is being represented in the talks by Bernard Somers, a debt restructuring specialist and former non-executive director of AIB.

Brookside owns Sir Anthony’s coastal estate in Glandore, Co Cork, while Indexia is his private investment vehicle that holds his near 5 per cent stake in Independent News & Media and his share of the oil explorer Providence Resources.

The precise size of Sir Anthony’s debt to AIB is unclear. It exceeds €4 million but informed sources yesterday suggested it could be significantly more.

Last week, The Irish Times revealed AIB is trying to force Sir Anthony to immediately repay loans secured on his holiday home in Glandore, and that he is selling his Georgian property in Fitzwilliam Square and also the six-acre estate in west Cork called Shorecliffe.