Mary Lou brings the house down before dust settles on economy

Business Week: Also in the news were warnings from Europe, housing and the coronavirus 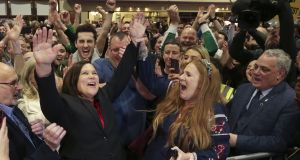 Sinn Féin leader Mary Lou McDonald entered the RDS count centre in Dublin last Sunday and was greeted with the type of reception usually reserved for the likes of Taylor Swift stepping on stage.

But instead of thousands of screaming young “Swifties” singing the hits, there were dozens of jubilant – almost disbelieving – Sinn Féin supporters singing “Hello Mary Lou”, convinced by then that a bright new dawn was breaking for the party.

Sinn Féin had achieved an unprecedented political feat, winning the popular vote with almost a quarter of first preference ballots and, in so doing, breaking the Fianna Fáil-Fine Gael duopoly that has dominated Irish politics for decades.

As the dust began to settle in the following days, attention turned to what Sinn Féin’s involvement in government might mean for society, business and the economy. Initially, at least, there was alarm among investors in Irish banks and property firms.

Global financial newswire Bloomberg wasted no time in suggesting now “could be a good time to dump the country’s bonds” highlighting that risks may increase and noting Sinn Féin’s spending promises.

More than €346 million was wiped off the stock market value of Ireland’s two biggest banks on Tuesday as Bank of Ireland lost €129.3 million of its value while its rival, AIB, dropped €217.2 million.

Listed property companies took a battering on both Monday and Tuesday before recovering some lost ground, with the exception of house builder Glenveagh, which fell a further 2.3 per cent after shedding almost 11 per cent on Monday.

It was all a bit of a panic, but relative calm soon descended. Ratings agency DBRS said it did not expect Ireland’s credit quality to deteriorate following the election, while S&P Global Ratings agreed, in spite of a likely “more relaxed” budgetary stance.

European Central Bank chief economist Philip Lane was in Dublin and he, too, played down fears of economic rack and ruin. “What is true of all the manifestos is that the bedrock of the Irish economic model is not under discussion,” he said.

Later in the week, Minister for Finance Paschal Donohoe made an impassioned plea to international businesses and financial service executives not to lose sight of the Republic as a location for growth and investment following the election.

Financial services, he said, would “continue to be an essential element of the Irish economy and economic model under the next government and future governments”.

So much for the pre-election mantra that Sinn Féin would “wreck the economy”.

Even senior business leaders who, before the election, had been issuing dire warnings of their own quickly changed their tunes once the votes were counted.

One of the biggest issues that propelled the Sinn Féin surge during the election campaign was the party’s promise to reverse plans to push the age of eligibility for the State pension out – but the OECD this week suggested the move would be ill-advised.

Retirement age should reflect increased life expectancy, according to the organisation’s chief economist, Laurence Boone, who also warned the State’s coffers could face a sharp rise in pension and healthcare costs over the next 10 years as our population grows older.

Boone said the problem could lead to an increase in public spending by 1.5 per cent of gross domestic product by 2030.

The OECD predicted that GDP growth would soften to 3.6 per cent this year and 3.3 per cent in 2021 while unemployment will fall to “historically low” levels. That followed the Central Bank of Ireland’s assessment that GDP would grow by 4.8 per cent this year to €373.6 billion.

New figures from the Central Statistics Office showed that residential property prices in Dublin fell by 0.9 per cent over the course of 2019, while the average price across the State rose by 0.9 per cent.

Dún Laoghaire-Rathdown recorded price falls of 6 per cent in 2019 although parts of Dublin did post some growth. In Fingal, for example, prices rose 2.9 per cent. When Dublin was excluded, the picture was steadier, with prices up 2.8 per cent in the year.

Elsewhere, a report from the European Commission suggested a “marked rebound” in Irish consumer and business confidence, with the threat of a no-deal Brexit receded, is supporting a more optimistic outlook for the economy.

However, the commission raised the prospect of significant economic fallout from the coronavirus epidemic, which is already rocking global commodities markets and disrupting the supply networks that act as the backbone of the global economy.

At home, Central Bank governor Gabriel Makhlouf said we would feel the pain through reduced demand for Irish exports in China, as well as the “negative impact on overall world demand and a consequential impact on Irish exports”.

Housing crisis still to the fore

The issue that may make or break the next government remains the housing crisis, and figures this week showed that home completions were at their highest in a decade last year, although still way behind the target we need in order to meet demand.

Bank of Ireland chief executive Francesca McDonagh told a meeting of business leaders that the country must “build up” with taller apartment blocks in Dublin and other cities to solve the crisis.

On that note, planning permission was granted for a six-storey apartment block with 63 units on the site of a former Gowan Motors on Merrion Road, Dublin 4, in spite of local objections.

Finally, AIB said the introduction of a shared ownership or loan equity scheme would help a key segment of the home ownership market – people who earn too much to qualify for social housing but not enough to get a mortgage to buy their own home.