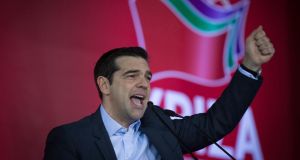 Dublin The Iseq slid 0.9 per cent as its biggest stocks recorded mixed fortunes.

Building materials group CRH closed down fractionally at €21.70. Aer Lingus slipped 2.2 per cent to €2.37, on a day when the bidder for the airline, British Airways’ parent company IAG, met Government officials to discuss the future of its shareholding. Ryanair, which is its rival’s biggest shareholder, fell 1.1 per cent to €10.44.

However, drinks group C&C climbed 1 per cent to €3.40 and Origin Enterprises also posted a 2.3 per cent gain, closing at €7.98. A day after it bought Belgian company Joris Ide, insulation maker Kingspan enjoyed a good session, surging 6 per cent to €16.65.

London UK stocks rose for the ninth day in 10, with the FTSE 100 index of blue-chip shares finishing up 0.2 per cent at the close of trading.

ARM Holdings, which provides the chip technology to Apple, benefited from the US giant’s better-than-expected performance as its shares rose 2 per cent to 1,049 pence.

Among the fallers, sustainable technologies firm Johnson Matthey dropped 3 per cent. The biggest riser in the FTSE 100 Index was brewer SABMiller which closed up 4.6 per cent at 3,594.5 pence. The biggest faller was supermarket group Morrisons, which closed down 6.2 per cent at 186.3 pence.

Europe Greek stocks slid 9.2 per cent, while a Greek banking index hit a record low after a 27 per cent plunge, amid investor fears that the new government’s anti-austerity stance will jeopardise liquidity. National Bank of Greece and Piraeus Bank plunged at least 25 per cent. The Athens market has lost 15 per cent of its value this week.

Shares in Electrolux were among the top gainers, rallying 12.1 per cent. Nordea, the Nordic region’s biggest bank by market value, soared by 8.8 per cent.

US Apple jumped 7.5 per cent after reporting a 30 per cent advance in quarterly revenue and a 38 per cent surge in net income to a record $18 billion. Boeing climbed 5.7 per cent.

Yahoo! advanced 1.3 per cent after announcing a spinoff of its stake in Alibaba Group. (Additional reporting: Bloomberg/Reuters)

1 My aunt never told us that Gran passed away with no will
2 Green Party TD queries ‘usefulness’ of another appeal in €13bn Apple tax case
3 Government to push through €2bn credit guarantee scheme next week
4 If it’s safe to do so, could this be the time to spend for Ireland?
5 Brussels plans attack on low-tax member states
6 The $6bn judgment pitting Nigeria against Irish businessmen
7 Owners of Cork shopping centre sue for €30m after car causes fire
8 Majority of employees don’t want to return to pre-Covid working patterns
9 Datalex shares slide almost 24% as trading suspension is lifted
10 Covid anxiety among domestic holidaymakers could sink this summer
Real news has value SUBSCRIBE