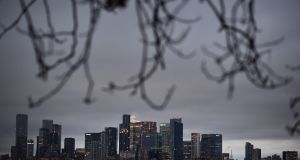 European shares eased slightly on Wednesday, ending a four-day winning streak, though markets still hovered near nine-month highs amid a relaxation of coronavirus restrictions and growing hopes that vaccines would soon become available.

The London market was weaker, however, as the UK government set out its plans for record borrowing and a budget watchdog warned that the economy would not recover to pre-pandemic levels until the end of 2022.

The Iseq closed up 0.9 per cent, outperforming the major European indices, with the market lifted by a 2.15 per cent climb for building materials group CRH, which finished at €35.64, extending a 4 per cent gain in the previous session.

Ryanair also boosted the index with a 1.3 per cent rise taking the airline to a closing price of €15.60 as optimism about a return to travel grew.

Ferries operator Irish Continental Group added 1.6 per cent to €4.40 on a day when it reported a 26 per cent slump in revenue during the first 10 months of the year, though a plummet in passenger numbers and container shipments was partly offset by an increase in lorries carrying goods.

There were contrasting fortunes for AIB and Bank of Ireland, with the former adding 1.6 per cent to €1.50 and the latter dropping 1 per cent to €2.82.

The Ftse 100 fell 0.6 per cent as a spending review by chancellor Rishi Sunak led to more cautious sentiment, while the domestically focused mid-cap Ftse 250 underperformed amid economic gloom exacerbated by Brexit uncertainty.

Virgin Money UK dropped 4.9 per cent after the lender reported a slump in annual profit as it took an impairment charge against an expected surge in bad loans.

United Utilities, one of the largest listed water companies in the UK, jumped more than 4 per cent as it proposed a higher interim dividend, with the stock closing 2.6 per cent higher.

London-listed explorer Tullow Oil fell 4.2 per cent after the debt-saddled, Irish-founded company said it planned to generate $7 billion (€5.9 billion) in cash over the next decade. Irish food group Greencore’s woes continued with a 6.6 per cent slide.

Reckitt Benckiser, the maker of consumer goods including Finish dishwasher tablets and Dettol disinfectant, rose 2.1 per cent after analysts at Jefferies highlighted a “high level of confidence” in its new leadership team.

The pan-European Stoxx 600 index inched 0.1 per cent lower, with the Dax flat in Germany and the Cac 40 nudging up 0.2 per cent in Paris.

Gains in the utility and telecom sector were outweighed by losses in automobile stocks, with Germany’s Volkswagen and Sweden’s Volvo both down 1.2 per cent, as well as falls for mining and energy stocks.

ABN Amro Bank and Commerzbank dropped more than 3 per cent and led euro-zone lenders lower after the European Central Bank said the industry would probably have to set aside more money to soak up losses when governments’ pandemic supports end.

A rotation out of tech shares and into cyclicals reversed course in early trading as investors cast a wary eye on data that suggests a possible slowdown in economic growth.

The S&P 500 index retreated from a record and the Dow Jones Industrial Average fell back below 30,000. The tech-heavy Nasdaq edged higher ahead of the Thursday Thanksgiving holiday.

Tesla continued its ascent, trading 2.8 per cent higher, while Amazon was up 1.8 per cent ahead of Black Friday.