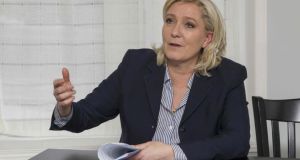 When millions of leaked documents revealed the wide use of tax havens by hundreds of politicians, business and sportspeople, France’s far-right National Front party seized on the opportunity to lash out at the effects of “wild globalisation”, one of its favourite themes. “The control-free movement of men, goods and capital, coupled with high finance’s stranglehold on all levels of the economy, can only produce global fraudulent and money-laundering systems,” the party said in a statement on Monday.

However, it now turns out that close friends and family members of its leader, Marine Le Pen, have not been averse to tapping those offshore jurisdictions, it is alleged in the Panama Papers.

Le Monde, one of the 108 media organisations to publish findings on the leaked documents, alleged yesterday that Frédéric Chatillon, a long-time friend of Ms Le Pen and head of Riwal, a communications company used by her party, worked with a company based in a tax haven to send about €300,000 offshore, with the help of an adviser to the National Front leader.

According to Le Monde, Mr Chatillon set up a Hong Kong-based shell company called Time Dragon, owned by an entity in the British Virgin Islands. The BVI-based company appears in the list of entities created by Mossack Fonseca, the Panama-based law firm from which the leaked documents originated.

According to Le Monde, an accountant who advised Ms Le Pen on her economic programme during her presidential campaign in 2012, allegedly had another Hong Kong company – owned by his brother – issue an invoice, allowing it to transfer the cash from France to Hong Kong. The cash was later transferred back to Time Dragon and reinvested in a Singapore-based company, Le Monde alleged.

Mr Chatillon, who met Ms Le Pen in the 1990s and who is separately under investigation over suspicion of illegal campaign funding for the FN, said on his Facebook page that the operation had been “perfectly legal” and his intention was to invest his company’s cash in Asia.

Ms Le Pen, who is considering running for the presidency next year, and her inner circle are battling other allegations. In December, the high authority for public life transparency, the body in charge of vetting members of parliament, said it suspected she and her father Jean-Marie Le Pen may have underestimated the value of their wealth.

Mr Le Pen, the FN’s founder, is separately being investigated by authorities on suspicion of tax evasion. Prosecutors suspect Mr Le Pen may have been the ultimate beneficiary of an undeclared HSBC Swiss bank account with €2.2 million of funds, mostly in gold bars and coins.

Le Monde reported on Tuesday that one of the companies used, Balerton Marketing, appeared in the Panama leaks. Mr Le Pen has denied any wrongdoing.

On Monday evening, the FN pre-empted the revelations in Le Monde, saying it was “not involved in the Panama Papers affair” and would “not tolerate any confusion”. “Or else, are we going to consider that the government is involved because the Rothschild bank of Mr Macron is cited?” it asked, referring to the French economy minister’s four-year stint as a Rothschild banker.– Copyright The Financial Times Ltd 2016

Evictions can recommence from April 23rd

10 INM to rebrand as Mediahuis Ireland from May