Waterford Crystal owner sold to Finnish group for about €400m 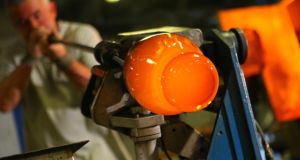 About 50,000 high-end pieces of crystal are made in the manufacturing facility in Waterford, which also hosts factory tours.

The group that includes Waterford Wedgwood, which was bought out of receivership six years ago for about €100 million, is to be sold to a Finnish homewares business for four times that price.

KPS bought the group, which includes the Waterford Crystal complex that employs about 120 people, from receivers appointed in 2009 following its collapse under the ownership of Anthony O’Reilly and Peter Goulandris.

Fiskars, Finland’s oldest company which supplies luxury homewares and garden products, will acquire the business on a cash and debt free basis.

The deal is subject to US antitrust clearance and is expected to close in July. KPS hired Goldman Sachs earlier this year to find a buyer for WWRD. The business had sales in the 12 months to April 5th of $432 million and earnings of $33 million.

The Finnish company indicated that it intends to respect the “heritage” of the brands, suggesting suggesting there is no immediate danger to the company’s operation in its home city, where a new visitor centre and small manufacturing facility opened in 2010.

“Fiskars will continue to develop all WWRD... brands, as the success of each brand stems from preserving their intrinsic values,” said Kari Kauniskangas, chief executive of Fiskars.

“As a company with centuries of history, the heritage and longevity of WWRD’s brands resonates strongly with Fiskars. The unique offering of each brand is based on a combination of their heritage and history. Fiskars will focus on strengthening these unique brands.”

It manufactures about 50,000 high-end pieces of crystal in the company’s manufacturing facility in Waterford, where it also runs factory tours. KPS shifted most major production to Germany and eastern Europe when it bought out the company.

Mr O’Reilly and Mr Goulandris lost about €400 million trying to save Waterford Crystal from collapse in the period before its receivership.

Its pension scheme also collapsed, leading to a long-running legal battle between unions and the Government which resulted in a ruling at the European Court of Justice in favour of the workers. The cabinet in December signed off on a €178 million package for the pensioners.

Fiskars had sales of about €768 million last year and employs 4,800 people in 20 countries. Its other luxury brands include Iittala, Royal Copenhagen, Arabia and Rörstrand.

Fiskars claims to be the oldest company in Finland, evolving from an ironworks that it says was established in 1649.

Coronavirus infects markets, Digicel talks about sharing and housing promises 06:30
‘The Brexit loan scheme was a great initiative and it has helped us continue to grow’ 05:58
Hospitality industry hoping it isn’t afflicted by US coronavirus fears 05:23
‘The only time apartments were viable was in . . . Ballsbridge, Killiney and Dalkey’ 05:08
Why Irish banks are now looking beyond vulture funds on problem loans 05:04
Search executive
jobs on irishtimes.com