An estimated 80,000 Irish owners of Audis, Volkswagens, Skodas and Seats are affected 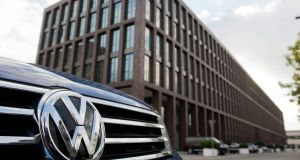 VW owners will be told if their vehicles require a refit. Photograph: Julian Stratenschulte/EPA

Volkswagen Group says it is going to ‘refit’ the estimated 11 million vehicles affected by its cheating on US diesel emissions test.

With an estimated 80,000 Irish owners of Audis, Volkswagens, Skodas and Seats affected, frustration is growing over the lack of information and action over the matter.

Yesterday the embattled car giant pledged to keep drivers of affected vehicles informed “over the coming weeks and months” about what work may be needed on the vehicles. VW insisted the vehicles are safe to drive.

According to Volkswagen Ireland: “We are currently working with the factory still to establish the exact number affected for the local market. We will announce these figures along with details of the refit when we get them.”

VW owners will be told in the coming days if their vehicles require a refit. Once regulators approve the technical fix, customers will be invited to make an appointment with a mechanic.

The scandal centres on software in the engine management system of a range of diesel engines designed to cheat emissions tests for nitrogen oxide (NOx).

Volkswagen’s newly-appointed chief executive Matthias Müller reiterated the software is only activated in a “portion” of the 11 million vehicles. This may mean the fix is relatively straightforward for some cars.

However, VW has not said yet whether removing the defeat device can also reduce fuel economy in vehicles where the software has been activated and, if so, how it plans to address this.

The firm has confirmed the 11 million vehicles featuring the EA189 diesel engine at the centre of the scandal comprise: 5 million VW cars, 2.1 million Audis, 1.8 million VW commercial vehicles, 1.2 million Skodas and 700,000 Seat vehicles. There are three variants of the diesel engine: a 1.2-litre, a 1.6-litre and a 2-litre.

In its statement the firm said: “In a first step, the customers affected will be informed that the emissions characteristics of their vehicles will be corrected in the near future. All vehicles are technically safe and roadworthy. “Under the action plan, Volkswagen and the other group brands whose vehicles are affected will present the technical solutions and measures to the responsible authorities in October.

VW is putting together an action plan to deal with the crisis, and has appointed Jones Day, a US law firm, to carry out an investigation into how the emissions cheating occurred.

“It’s about winning back lost trust,” said Mr Müller. “For that we need an unsparing and systematic inquiry . . . We will learn from our mistakes.”

Investors are concerned that VW faces billions of euro in fines, recall costs and lawsuits in the wake of the affair, as well as damage to its brand.

The Dow Jones Sustainability Indices said it planned to remove VW from benchmark lists due to the emission tests manipulation.

German prosecutors have launched a preliminary investigation into whether former chief executive Martin Winterkorn defrauded customers in relation to the scandal. Mr Winterkorn, who resigned last Wednesday, has denied prior knowledge of the cheating.

Rivals are starting to take advantage of the situation. Ford is believed to have written to dealers assuring them the firm has no problems with emissions test results. In a similar letter due to be issued to customers today, the firm states “All Ford engines (be they diesel or not) have honestly passed the applicable emissions tests. We don’t use so-called ’defeat devices’ and we never have.”

1 Ireland has EU’s most progressive tax system, study finds
2 MEPs reject Central Bank’s Gerry Cross for key banking role
3 Davos: OECD confident on digital tax deal as France takes swipe at Ireland
4 Who are Ireland’s 17 billionaires?
5 On your bike: Dropbox backs Dublin Cycling Campaign
6 Aldi to implement living wage for store employees
7 Are there annual limits on inheritances or gifts to a child?
8 Fianna Fáil may have just pressed the pause button on the property market
9 Will there be enough cash to meet the parties’ election promises?
10 Total and Tullow launch joint sale of stakes in Kenyan oil project
Real news has value SUBSCRIBE