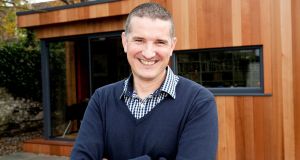 John Sherry: “We thought it was going to be a business that would simply tide us through the downturn but the business is standing on its own two feet now”

John Sherry established Garden Rooms in 2003, building log cabin-style rooms that served as extra spaces in clients’ gardens. There was great demand for the product and by 2007 Sherry had grown turnover to €1.8 million.

Then the recession hit, and, while the demand for Sherry’s product remained, the ability of the consumer to pay for it ceased. His business “imploded”. Not to be put down, Sherry diversified and began to examine the longevity of his business more carefully.

Despite having qualifications in accountancy and marketing and previously working in those areas, Sherry says he always yearned to go it alone.

“I had no love for accounting and went into sales and marketing,” he says. “Running my own business, I can now see the benefit of the grounding in both disciplines. I’ve looked at the academic side and then tried to implement a lot of it.”

In the early days, Sherry allowed his work and word-of-mouth to speak for themselves. Even today he encourages any potential customers to contact his client list in order to see how previous customers have found their “garden room”. He believes a large part of growing his business has been about trust.

“Coming up to the recession from 2003 to 2007, it was about building the business through sales and, because the market was there, I didn’t really have to promote myself,” he says. “In hindsight, I should have been shouting from the rooftops earlier but I think that is more of a maturity or a confidence issue on my behalf.”

“We all talked about a ‘soft landing’, but my business completely imploded. The need was still there for my product but the ability to pay for garden rooms had ceased,” he says.

With his back against the wall and crediting his wife’s prudence for his survival, Sherry sat down to re-examine the business.

He diversified through the creation of a new business, Garden Play, which supplies high quality children’s climbing frames to private clients and which is now a successful business in its own right.

“We got into this in the recession and it really saved us, to be honest. The case was that people weren’t spending on themselves but they were still spending on their children,” says Sherry.

“We thought it was going to be a business that would simply tide us through the downturn but the business is standing on its own two feet now and we’ve done over 2,500 climbing frame fit-outs for private clients nationwide to date.”

Sherry has expanded his repertoire of business still further with the introduction of Simply Extend, which provides traditional house extensions. He houses all three businesses at showrooms on Ashbourne Road in Dublin.

With regards to Garden Rooms, Sherry admits he was basically “playing at business, rather than running a business” during the worst years of the recession.

However, the quiet period provided an opportunity for becoming leaner and taking stock and resulted in a change of direction for Sherry. Employing an architect to design a more contemporary product, the design of the garden rooms went from log cabin-style builds to a more streamlined, fully-insulated, cedar-clad “cube”.

It’s a reassessment that is paying dividends: pent-up demand means 2015 was the most successful year for Garden Rooms since its inception, seeing a doubling of the number of units sold over4 2014.

“Twenty per cent of our customers in 2015 had either downsized or moved home and part of their concept of moving incorporated Garden Rooms from the very start,” says Sherry.

“The customer is a lot more confident in themselves now. In the past it was a question of looking for more space. Now aesthetics are a big part of the choice people are making. Our products have become an aspirational choice, whereby the aesthetics are as important as the additional space.”

Having weathered the recession, Sherry is now approaching Garden Rooms with renewed confidence.

“Customers have become very savvy in what they want. They’ve done their research and people are now considering our product very much as a third solution alongside the traditional attic conversions and extensions,” he says.