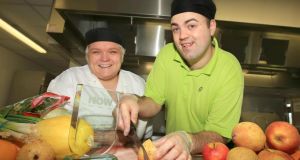 Tony Sewell with Deborah Elliot-Gracey from Mount Charles Catering, which was named as Employer of the Year 2013 by social enterprise organisation NOW.

What’s the first thing you think of when someone says office Christmas party? A good excuse – so you don’t have to go?

Whether you love them or loathe them, you probably won’t be thinking that by attending your company’s annual Christmas bash you could actually help someone else get a job.

But that is exactly what businesses in Belfast are doing this year by supporting a local charity that provides training and job opportunities for people with learning difficulties.

December tends to be one of its busiest periods, thanks to its Christmas party menu, which gives Belfast-based businesses the opportunity to reward their staff while financially supporting a local organisation.

All of the profits earned by Loaf are reinvested to create fresh opportunities to help get more people into work.

According to Rachel Doran, employment services manager with NOW, around 750 people pass through its doors each year, some of whom may have never had the opportunity to train for a job before.

“We work with people of all abilities, some of whom have severe learning difficulties, and we help them at all stages of employment, whether they are just leaving school or are perhaps in a job which they feel is under threat because their employer does not understand fully what their learning difficulty entails.

“We help people get work placements, provide on the job training, and then help them get the job they want and keep that job,” Doran says.

Loaf Catering operates two cafes as well as the corporate catering business – the cafes provide NOW trainees with an opportunity to work in a real business environment and to deal with the everyday challenges that arise.

Doran says the organisation enjoys fantastic backing from the business community in Belfast. “Most of the time companies tell us that they book Loaf simply because the food is good. The fact that they are also supporting the social economy and helping us make a profit that goes back into providing services is an added bonus for them.”

Last year this support ensured that NOW helped 19 people get jobs they might not otherwise have got an opportunity to even apply for – which translated into £90,000 in wages for the local economy. Nearly 300 people with learning disability or autism also received training for a job and 159 people gained accredited qualifications.

NOW is part of an expanding network of social enterprises which are estimated to employ more than 12,000 people and give the people they work with a real chance of a better future by helping them get a job.

Their growing contribution to the local economy is likely to come under the spotlight as part of a new initiative that has been launched to tackle what the local Executive terms “economic inactivity”.

There are currently 558,000 people without a job, who are officially classed as economically inactive – they are either sick/disabled, looking after family/home or are retired or are students.

According to official government statistics, 90 per cent of the economically inactive “do not want work”.

Hardly surprising then that the North has one of the worst rates for people who do not want work in the UK – 27.4 per cent of the working population aged 16-64 compared to an UK average of 22.2 per cent.

Health reasons
Employment minister Dr Stephen Farry has acknowledged there are people who “for a range of complex personal and health reasons” will never be able to work. But his department and the Department of Enterprise now want to develop a strategy that will get more people into work through a combination of skills, training incentives and job creation. They have set a target of getting 30,000 more people into work by 2023.

Organisations such as NOW will have their work cut out in helping make these ambitious targets a reality – to help make a job in Northern Ireland for life and simply not a Christmas wish.