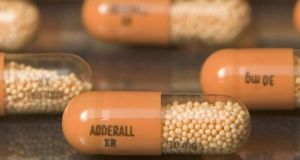 Founded in 1986 in Britain, Shire conducts most of its business in the United States and has been domiciled in Ireland for tax purposes since 2008. Photograph: JB Reed/Bloomberg News

US drugmaker AbbVie Inc has confirmed today that it had made a bid approach to Shire , which was rejected by the British group’s board. It said talks were no longer ongoing.

AbbVie was responding to a Reuters story yesterdat which revealed the talks.

It is possible that other suitors will emerge for Shire, people involved in the talks said.

Founded in 1986 in Britain, Shire conducts most of its business in the United States and has been domiciled in Ireland for tax purposes since 2008. With its tax base in Ireland, where effective corporate tax rates are among the lowest in the world, Shire, with a mid-sized market value, has been seen as a prime takeover target for US drugmakers.

Shire specialises in medicines for attention deficit hyperactivity disorder (ADHD), which account for around 40 per cent of its sales. The firm also sells pricey drugs to treat rare genetic disorders and is building up a portfolio of treatments in ophthalmology and other specialty disease areas.

AbbVie, based in North Chicago, Illinois, was founded last year as a spin-off from Abbott Laboratories. The company has been criticized for its overreliance on its top drug, Humira, which comprised over half of its revenue in the most recent quarter.

To lessen its reliance on Humira, the company is attempting to develop treatments for hepatitis C, cancer and other diseases.

Shire had also been approached by Allergan Inc in the months before the Botox maker itself became a takeover target for Valeant.

That approach did not lead to serious discussions between the two parties and there are currently no talks with Allergan.

US pharmaceutical companies are in a race to keep up with rivals and are looking at lowering their tax rates in order to do so, in what is called as an inversion. Recent inversion deals have included medical device company Medtronic Inc’s $42.9 billion deal for Covidien this week, as well as Pfizer Inc‘s abortive $118 billion bid for AstraZeneca PLC .

Some US lawmakers are concerned that the deals erode government revenue by giving corporations another tax-avoiding loophole. Two bills in the US Congress and a White House proposal would make inversions harder to do, but neither has gained much traction.