Merck cautious on 2016 as sales of top medicines lag 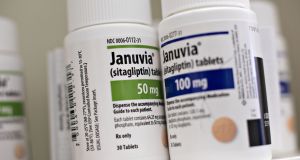 Drugmaker Merck on Wednesday issued a cautious 2016 outlook and reported disappointing fourth-quarter sales of its Januvia diabetes treatment and its Remicade arthritis drug, sending its shares down nearly 3 per cent.

Sales of Januvia and a related drug called Janumet, the company’s biggest franchise, fell 12 per cent to $1.45 billion. Merck said wholesalers had stocked up in the prior quarter, and the products face growing competition from other oral diabetes treatments.

But Adam Schechter, the company’s head of global human health, said Januvia sales should increase this year, excluding the effects of a stronger dollar, which reduces the value of revenue from overseas.

Sales of Remicade, which is facing competition outside the United States from cheaper biosimilars, dropped 29 per cent to $396 million. In a conference call with analysts, Mr Schechter said the drug’s market share was shrinking, and the trend would accelerate.

“Our initial read on the earnings and guidance reaffirms our neutral stance on [Merck] as pressure on key products such as Januvia and Remicade will likely limit near-term growth,” Credit Suisse analyst Vamil Divan said.

Merck is counting on Keytruda, a recently approved treatment for melanoma and lung cancer, to boost its earnings for years to come. The medicine, which takes the brakes off the immune system, is competing with Bristol-Myers Squibb’s similar Opdivo treatment, which is picking up sales faster.

Keytruda sales rose to $214 million in the fourth quarter, about half Opdivo’s $475 million in revenue in that period.

Merck, the second-largest US drugmaker behind Pfizer , forecast full-year earnings of $3.60 to $3.75 per share, excluding special items. The analysts’ average estimate was $3.72.

Fourth-quarter revenue fell 3 per cent to $10.22 billion, below analysts’ expectations of $10.35 billion. Sales would have risen 4 per cent if not for the stronger dollar. Net income fell to $976 million from $7.32 billion.