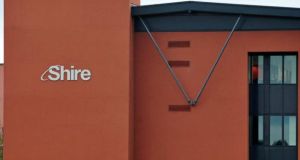 Shire has been advised that the $1.6 billion “break fee” received from AbbVie after the collapse of their abortive merger is not taxable — exposing the Dublin-based, UK-listed drugmaker to fresh scrutiny over its tax affairs.

The windfall — one of the biggest of its kind — was paid by AbbVie last October after the US drugmaker pulled out of its agreed £32 billion takeover of Shire.

Shire said: “The company has obtained advice that the break fee should not be taxable in Ireland?[AND] has therefore concluded that no tax liability should arise.”

However, it cautioned that “this has not been agreed with the tax authorities”.

Jeff Poulton, interim chief financial officer, told the Financial Times that the company was in the early stages of dialogue with Irish tax authorities on the matter.

The Revenue Commissioners said that as a matter of policy it would not comment on individual cases.

Shire has already committed the break fee to help finance its $5.2 billion acquisition of US-based NPS Pharmaceuticals, agreed last month, as it resumes its expansion as a standalone company focused on speciality medicines and rare-disease drugs.

International tax experts said break fees would be taxable in most cases in the US and the UK but acknowledged it was a complex area and that Shire’s case would depend on Irish tax law.

Irish tax experts said that compensation-type payments were generally taxable in Ireland, but that it may depend on the circumstances in which they were received.

Peter Vale, tax partner at Grant Thornton in Dublin, said: “Payments such as this would often be subject to tax, but there may be circumstances where it falls out of the tax net.”

The prospect of Shire’s windfall remaining tax-free adds a further twist to a saga that has shone a spotlight on corporate tax policies on both sides of the Atlantic.

AbbVie wanted to buy Shire in part to reduce its heavy US corporate tax burden by moving its official headquarters to the UK. The deal collapsed after president Barack Obama’s administration tightened US tax rules to make these so-called “inversions” less attractive.

Shire’s tax affairs have been a source of controversy since it moved its headquarters from the UK to Ireland in 2008 to take advantage of the latter’s lower corporate rate. More recently, it has been among the companies attacked by MPs in the UK for using complex tax structures in Luxembourg.

Flemming Ornskov, chief executive, said Shire met all its tax obligations around the world and tried to behave in a responsible manner. He acknowledged that it used “complex structures” to increase its tax efficiency but said this helped maximise resources not just for shareholders but also for investment in new medicines.

The advice on the AbbVie break fee came to light in Shire’s fourth-quarter financial results. The company reported a better than expected 19 per cent increase in revenues to $1.58 billion and earnings per share of $2.63, up 17 per cent.