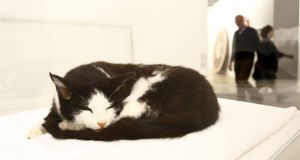 Circassia Pharmaceuticals lost nearly two-thirds of its value on Monday as its experimental cat allergy treatment failed in a late-stage trial, dealing a major blow to the high-profile British biotech company.

Circassia listed on the London stock market in March 2014 in Britain’s largest biotech flotation for decades and last year it expanded by buying two companies focused on asthma.

Hopes for a cat allergy treatment have been central to Circassia’s investment case, taking its valuation to $1 billion, but the company’s immunotherapy failed to meet the main goal in a Phase III study because of a marked placebo effect among patients not on therapy.

As a result, all groups in the study showed improvement compared to the baseline and the results of the active treatment groups were not significantly better than those on placebo.

In fact, all the groups showed an improvement of close to 60 per cent in rhinoconjunctivitis symptoms, such as itchy eyes, runny noses and sneezing.

RBC analyst Nick Keher described the news as “very disappointing” and shares in the company fell over 66 per cent to 90.36 pence. The stock was floated two years ago at 310p.

The company said it would stop its recently initiated registration study of its grass allergy treatment and preparatory work for a study on suitable doses of its ragweed allergy therapy. – Reuters