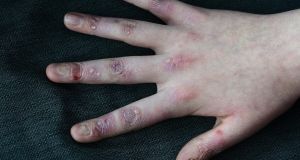 Shares in an Irish company developing a drug for a rare medical condition known as “butterfly skin” jumped over 50 per cent on Wednesday morning on the back of positive clinical trial data.

Amryt Pharma said its Filsuvez gel had demonstrated a significant increase in the speed of wound healing in epidermolysis bullosa (EB) in a late-stage trial, the first treatment to do so.

Releasing top line figures from the trial, which involved 223 patients – including 156 children – across 58 centres in 28 countries, Amryt chief executive Joe Wiley said they demonstrated that Filsuvez “could make an important difference to the lives of patients”.

EB is a chronic hereditary condition which leads to the blistering of the skin in patients at the slightest touch. Amryt, which specialises in developing therapies for rare medical conditions, says that the global incidence of EB is estimated to be approximately 1 in 20,000, which implies that there could be as many as 30,000 affected individuals in the US and over 500,000 worldwide.

On that basis Amryt estimates that there is an estimated $1 billion market for a successful treatment. There are currently no approved treatments for the condition.

He said the success of the trial in healing wounds “will undoubtedly lead to a meaningful quality of life improvement for patients living with the ‘worst disease you’ve never heard of’ .”

The Dublin-based company said on Wednesday that US regulatory submissions were already under way with the Food and Drug Administration (FDA), with a request planned for priority review.

An EU regulatory submission is also planned, with a request for accelerated assessment.

While the phase III trial did hit its main targets, Amryt said it did not achieve “statistical significance” on key secondary endpoints, though “a number of favourable differences were observed”.

It said additional secondary endpoint data was expected, and would be analysed over the coming weeks.

The Amryt drug has already been granted orphan drug status for the treatment of EB in both the EU and the US. That means should the gel treatment ultimately be granted market approval it should get longer patent protection – up to 10 years in the EU and seven in the US.

Amryt trades on the Nasdaq in the US, as well as the junior market on London’s Stock Exchange.

Shares in the business jumped 53 per cent by 11:30 am on Tuesday following the release of the trial update.