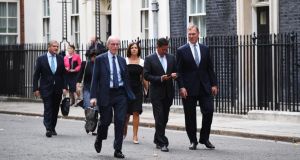 Tax cuts for banks and lighter regulation of the City of London are essential if the financial services sector is to thrive post-Brexit, top financiers told Sajid Javid in their debut meeting with the UK’s chancellor of the exchequer on Monday.

At least two attendees at the hour-long meeting at 11 Downing Street told Mr Javid that lenders’ tax rates, which include a bank “supertax” and a balance sheet levy, must be cut for the City to prosper in a competitive global market after the UK leaves the European Union.

Insurance company bosses repeated calls that some of the more extreme provisions contained in the UK’s adoption of EU Solvency II legislation should be repealed.

Among those present at the meeting with the chancellor were the chairmen and chief executives of Royal Bank of Scotland, Lloyds, HSBC and Barclays, as well as the bosses of Aviva, Prudential and Legal & General.

Mr Javid, a former investment banker, sought to reassure those present of the government’s recognition of the City’s importance to the economy, and its role in helping British business, attendees said.

He also stressed how keen he and prime minister Boris Johnson were to ensure that the City could continue to employ skilled staff from across the EU within a “light-touch” immigration regime, marking a “sea-change” from Theresa May’s government.

One banker at the meeting said the contrast with the previous administration, both on immigration and on broader government attitudes to business, was stark. The treasury was not immediately available to comment.

“The debate centred on how to make the UK more competitive from a tax and regulatory point of view after Brexit,” said one person familiar with the discussion at the meeting.

Despite broadly positive feedback about the meeting from attendees, several stressed their concern about the rising risks of a no-deal Brexit and the danger both to the City and the broader economy from disruption to trade, especially on smaller businesses.

Mr Javid suggested that there would be forbearance from the UK authorities towards imports from the EU, attendees said, but would not be drawn on the likelihood of friction from the EU27 over export tariffs.

Theresa May’s government had pledged to cut 87 per cent of tariffs on imports from the EU and from outside the bloc to ease the problems of a no-deal Brexit, although it had also planned to levy duties on cars as well as beef, chicken and pork.

This had threatened to hike prices paid for food and cars imported from the EU, but cut the overall impact of price increases for consumers and businesses that rely on imports from Europe.

Mr Johnson has been repeatedly warned by business leaders that a no-deal Brexit would have a particularly damaging impact on smaller businesses, which often lack the resources to properly prepare themselves for the cost and difficulties in dealing with hard borders and tariffs.

Michael Gove, the cabinet minister in charge of no-deal planning, hosted a similar meeting of business groups last month, asking business leaders for ideas about how to mitigate the impact of a no-deal Brexit.

The lobby groups have been told to come up with “creative and practical proposals” to help businesses get ready for Brexit for relevant departments, while the government has unveiled a series of initiatives to help spread the message that businesses need to get operations ready for leaving the EU including a national advertising campaign.

The government has also set aside a £10 million fund for trade associations to advise on Brexit preparations.

The chancellor “made clear his commitment to a close and ongoing dialogue between the government and the world’s largest and most influential firms in the sector”, according to a Downing Street official. “He also stressed that this sector is a top priority for him. He sees the financial services industry as a cornerstone of the UK’s economy, driving jobs, economic growth and innovation to the benefit of all.” – Copyright The Financial Times Limited 2019