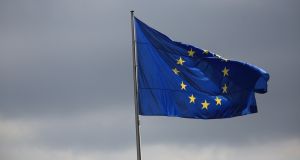 The commission has proposed that the court issue a large fine to Ireland. Photograph: Krisztian Bocsi/Bloomberg

The State is facing a €1.7 million fine and additional penalties of about €7,200 a day for failing to implement a new directive aimed at clamping down on money-laundering activities and terrorism financing.

The European Commission has referred Ireland to the Court of Justice for failing to fully transpose the fourth anti-money laundering directive into national law.

The commission has proposed that the court issue a large fine to Ireland, with the threat of additional daily penalties unless it takes appropriate action.

The State is one of three countries, along with Greece and Romania, to be referred to the court over the matter. While Ireland has implemented a limited part of the rules, the other countries have not transposed any of the legislation as of yet.

The fourth anti-money laundering directive came into force last June. It has since been succeeded by follow-up legislation that further strengthens the rules by limiting the use of anonymous payments through pre-paid cards, including virtual currency exchange platforms under the scope of the regulation, and by widening customer verification requirements.

All EU member states have to transpose the fifth anti-money laundering directive into national legislation by January 10th, 2020.

The European Commission on Thursday also referred the State to the Court of Justice for failing to correctly implement new safety legislation covering shipping accidents.