OFCB in Dublin is Otkritie’s main overseas funding vehicle with over €1.4bn of bonds 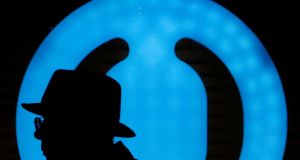 A man walks past the logo of Russian bank Otkritie in Moscow: Otkritie began experiencing massive deposit outflows in June, prompting clients to withdraw the equivalent of about $7.4 billion throughout July. Photograph: Sergei Karpukhin

A move by Russia’s central bank this week to rescue ailing lender Otkritie has seen the senior bonds issued by its Irish-based funding vehicle rally from distressed levels.

The value of $500 million (€419.2 million) of bonds sold four years ago by the Irish special purpose vehicle, OFCB Capital, jumped to 99 US cents on the dollar on Wednesday from 83 cents on Friday, when concerns over the Moscow-based group were elevated.

Dublin-based OFCB is the Russian bank’s main overseas funding vehicle, with more than €1.4 billion of bonds in issue.

However, the value of €300 million of subordinated bonds issued by the Irish vehicle, due to be repaid in 2019, have slumped to 42 cent on the dollar amid fears that holders of this debt may be asked to contribute to the bank’s rescue.

The Russian central bank moved on Tuesday to take at least a 75 per cent stake in the country’s biggest private lender in what is one of the biggest rescues to date of a financial institution in the country.

For the Kremlin, maintaining confidence in the banking system is a top priority ahead of the March 2018 presidential elections, in which Vladimir Putin is expected to run for a fourth term highlighting the country’s nascent economic recovery.

Otkritie had catapulted itself into the top ranks of Russia’s banks over the last three years even as the sector was battered by recession and growing bad loans. The bank took over other lenders, as well as a pension fund and an insurer.

Otkritie began experiencing massive deposit outflows in June, which accelerated after a surprise ratings downgrade, prompting clients to withdraw the equivalent of about $7.4 billion throughout July and sparking fears of contagion.

Ireland is the euro zone’s largest centre for financial special purpose vehicles (SPVs), which are ultra tax-efficient and largely unregulated, and has been used increasingly by Russian banks over the last decade to base international fundraising entities. Two Russian banks that collapsed in the past year and a half – Vneshprombank and Tatfondbank – had sizeable funding SPVs based in Dublin.

Global organisations such as the Financial Stability Board and International Monetary Fund have been pressing Irish officials to look more closely at the activities of SPVs as they hunt for risks in the world of “shadow banking” – financial activity that takes place outside the traditional banking sector. – (Additional reporting: Bloomberg)

1 How well paid do you think you are? Here’s how to work it out
2 Life as a Facebook moderator: ‘People are awful. This is what my job has taught me’
3 AIB to sell more than 500 ATMs to Brink’s
4 Wealthy investors’ legal challenge against Revenue fails
5 Accumulated profits at Marian Finucane firm exceeded €830,000
6 Dublin down nearly 4% as coronavirus hits markets
7 Flight attendent seeks High Court injunction against Aer Lingus
8 Why Irish savers should forget about banks
9 New 24-storey tower for Cork city approved despite council concerns
10 Tesla takes hit on China sales even before major impact of Covid-19
Real news has value SUBSCRIBE