Unions will vote later this week on proposed transfer 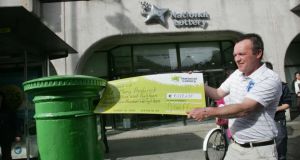 A lucky winner of the lottery. The Government’s planned €405 million sale of the franchise to the Premier Lotteries consortium has been held up because of a dispute over the transfer arrangements.

The Labour Court has moved to reassure National Lottery workers on their future job security ahead of a key vote on the planned sale of the business.

In a recommendation, seen by The Irish Times, the court said arrangements for the transfer of staff to the incoming operator provided sufficient protections in terms of “security of tenure”.

However, it recommended that staff seeking to return to An Post, from where they have been on permanent secondment, could be facilitated through a job-swap programme.

This would involve matching up lottery staff wishing to return to the semi-State with staff seeking to join the lottery franchise from An Post.

Two of the three unions representing lottery workers, which between them account for about 90 of the 111 staff, will ballot members on the recommendations this week, with the result expected to be known on Friday. The Government’s planned €405 million sale of the franchise to the Premier Lotteries consortium has been held up because of a dispute over the transfer arrangements.

Contracts between the Government and Premier Lotteries, comprising An Post and UK operator Camelot, were to have been signed in December. Last month, a union vote on the issue ended in deadlock with the matter being referred to the Labour Court. A No vote or an inconclusive result this week would leave the Government’s planned privatisation of the lottery in limbo.

Lottery staff are also seeking a “recognition payment” as part of the transfer, though no figure has been attached to the claim. Last week, independent retailers group RGData also wrote to the incoming operator seeking a once-off “loyalty” payment of €15,000 for each of its members.