Jonathan Sugarman: Ireland has destroyed the lives of whistleblowers

Appearing before the Joint Committee on Finance on Thursday, Jonathan Sugarman has said that Ireland has 'destroyed the lives of every single whistleblower.' Video: Oireachtas 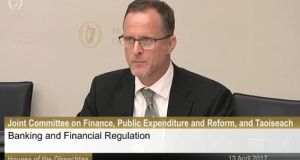 Jonathan Sugarman, a former Unicredit Bank Ireland risk manager, said he is “totally unemployable as a result of upholding the law of Ireland”.

Ireland has “absolutely and completely destroyed the lives of every single whistleblower” that has dared reveal irregularities to officials, a former banking executive who reported liquidity breaches at the Irish unit of Unicredit Bank in 2007 has claimed.

Appearing before the Joint Committee on Finance on Thursday, Jonathan Sugarman also said if former banking regulator Patrick Neary had been doing his job properly in terms of monitoring the banks, there would have been no need to issue a blanket guarantee in September 2008 that led to the country being saddled with a €64 billion debt.

Mr Sugarman was appearing before the joint committee as it continues its examination of the banking sector with a specific focus on regulatory reform and risk appraisal. His appearance coincides with a report issued by the Central Bank earlier this week criticising a number of international banks with operations here for having weak regulatory reporting control environments.

Mr Sugarman, a former Unicredit Bank Ireland risk manager, has repeatedly claimed his alerts to superiors and the Central Bank about the lender’s breaches of liquidity requirements in early 2007 went unheeded. He subsequently resigned his position in September that year and has been unable to find employment ever since.

“What I find absolutely incredulous is that my life has been utterly destroyed because I did the right thing but the people who are jointly liable for the failure to adhere to the regulations, which this house formulated and passed into law, got off absolutely scot-free,” he said.

Stating that neither Unicredit nor the Central Bank had faced sanctions, Mr Sugarman said there was “a delay between matters of potential or actual financial malfeasance being reported” and the time it takes for official Ireland to admit that it just “may have” an issue that must be dealt with.

In a strongly worded opening statement to TDS and Senators, Mr Sugarman said he is “totally unemployable as a result of upholding the law of Ireland”, adding that there is no support for whistleblowers of any kind here.

Namechecking fellow whistleblowers such as Maurice McCabe and John Wilson, as well as highlighting high-profile cases such as the disappearance of Mary Boyle and the Grace foster care abuse scandal, Mr Sugarman said civil and public sectors at the very top levels and those who have their hands on the levers of power “seem to be completely immune from any form of sanction”.

He also directly blamed the Central Bank failure to heed warnings of breaches for the decision to issue a banking guarantee, which ultimately led to Ireland being forced to take a bailout from the troika in 2010.

“Had the regulator done its job, it is my contention that the liabilities which were placed on the shoulders of the Irish nation, specifically the blanket guarantee which was given to all the Irish banks overnight, which was effectively a blank cheque underwritten by every citizen in the State, would not have been necessary,” he said.