AIB said to have offered more than €130m for Goodbody 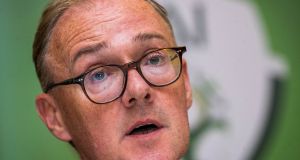 Goodbody Stockbrokers’ managing director Roy Barrett is planning to leave the firm after 25 years at the helm as part of a planned sale of the business to AIB, according to sources.

It is understood that Mr Barrett (57) decided some time ago that a change of control of the business would provide a natural exit route, giving AIB chief executive Colin Hunt, a former chief economist at Goodbody, a chance put his own stamp on future direction and make his own appointment.

Sources previously said that AIB, which was forced to sell Goodbody a decade ago as it went through an EU restructuring plan tied to its taxpayer bailout, plans to integrate the brokerage and wealth management firm into the bank. Goodbody enjoyed a large degree of autonomy under its previous 21-year ownership by AIB up until early 2011.

Mr Barrett, the second-longest serving head of a Irish financial services firm, after Cantor Fitzgerald Ireland chief executive Ronan Reid, became chairman of the Football Association of Ireland (FAI) in January last year, as the organisation set about addressing well-documented failures in its governance and finances.

AIB is said to have offered more than €130 million for Goodbody, which is 51 per cent owned by Kerry-based financial services firm Fexco. The rest is in the hands of management and certain staff, led by Mr Barrett.

The bid includes the brokerage’s 460 million of excess cash, largely a result of the sale of its stake in the Irish Stock Exchange two years ago, as well as its €20 million of regulatory capital reserves.

An element of the consideration is likely be withheld and only paid if Goodbody meets certain performance conditions, according to industry observers.

Goodbody has been the subject in the past 25 months of two abortive takeover deals by separate Chinese groups.

AIB is seeking approval from Minister for Finance Paschal Donohoe to allow Goodbody to continue to offer staff bonuses in good years, without attracting the prohibitive 89 per cent levy that has applied to variable pay at AIB and other bailed-out banks since the financial crisis.

Incentive-based remuneration is a key feature of the stockbroking and wealth management industry in Ireland, and beyond. It is used to attract and retain staff and rein in costs during bad years in a highly cyclical industry.

Goodbody’s most recent set of annual accounts filed with the Companies Registration Office show that Mr Barrett received an €80,000 interest-free loan from the company in 2018, though this had been reduced to €34,192 in January 2019.

The loan was a result of an overpayment to Mr Barrett of a bonus in 2016, which had been converted into a loan, to be repaid over time. Sources said the loan has now been fully paid back.

Separately, Mr Barrett was sued in July 2019 by Ceres Real Estate (Ireland) over the non-payment of a €1 million loan. The case was discontinued two months later. Sources said that an arrangement was put in place to deal with the liability.

5 Food intolerance group to double workforce as it expands

9 Is it a matter of time before Iseq laggards attract attention of ‘blank cheque’ brigade?