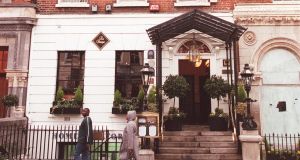 Louis Murray and his company, Balieboro Spring Water, in receivership, sued AIB and a receiver over an alleged breach of an agreement for the consensual sale of two Dawson Street properties. Photograph: Frank Miller

A High Court action by former La Stampa restaurant owner Louis Murray against a bank and a receiver has been withdrawn.

The case was being withdrawn on confidential terms agreed between the parties, John Fitzgerald SC, for Mr Murray told the court on Wednesday.

Mr Murray and his company, Balieboro Spring Water, in receivership, sued AIB and a receiver over an alleged breach of an agreement for the consensual sale of two Dawson Street, Dublin properties which housed the restaurant, a hotel and a bar.

The sale was intended to deal with a €19.8 million debt to AIB. In 2014, the bank appointed receiver Declan McDonald, who later sold the properties for €17.5 million.

The defendants denied there was any such consensual agreement.

Talks began on the fourth day of the case last week and continued on Tuesday when the court was told terms had been agreed subject to certain conditions. The matter was adjourned to Wednesday to allow Mr Murray to give instructions to his lawyers.

On Wednesday, Mr Fitzgerald said he was happy to confirm Mr Murray was withdrawing his claim on agreed terms and Mr Murray had also agreed to give an undertaking on certain terms.

Mr Justice David Barniville said the proceedings could be struck out and he also noted Mr Murray had agreed to a certain number of costs orders. The judge also gave liberty to the defendants to apply to court for enforcing the agreement.

He thanked the legal teams for their work and offered his best wishes to Mr Murray and the defendants.