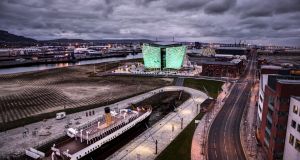 A Dublin firm set up during the crash by US hedge fund, Davidson Kempner, to pick up distressed financial assets across Europe paid just $125 in corporation tax last year on income derived from assets valued at $8 billion.

Accounts filed for Burlington Loan Management, which owns diverse assets such as stakes in failed Icelandic banks and loans secured on the Titanic Quarter in Belfast, show it had virtually no taxable income in 2015.

It was structured so that its profits would be wiped out by interest repayments to other entities abroad that have links to the US hedge fund.

Burlington’s accounts list $192 million in “investment income” and about $500 million in “gains on derivative contracts”, but these were wiped out by the interest payments, leaving it with taxable income of $375, the same as 2014.

Burlington is a Section 110 special purpose vehicle (SPV), which are complex “brass plate” structures that were recently at the centre of political controversy following allegations in the Dáil that they facilitate wholesale tax avoidance by so-called “vulture funds”.

However, Social Democrats TD, Stephen Donnelly, recently alleged in the Dáil that SPVs were also being used to avoid tax on activities undertaken in Ireland. He cited the repeated investigation of the sector by The Irish Times.

The accounts for Burlington show that Irish assets account for 20 per cent of its $7.6 billion of “financial assets”, or roughly $1.52 billion.

About 19 per cent of its assets are listed as being in the UK, with 5 per cent in Iceland, 15 per cent in Germany, and the rest spread globally. Its investments include loans linked to the Belfast-registered Titanic Quarter, facilities that were due to expire at the endof 2016. It has also invested in the bonds of Icelandic banks, Glitnir and Kaupthing, and loans from Spain’s so-called “bad bank”, Sareb.

SPVs have recently come under heavy regulatory scrutiny from the Central Bank of Ireland over fears that they may pose unquantified risks to the financial system. Regulators complained they don’t even know what some SPVs do.

A team of the bank’s economists last year published a report calling for tighter regulation of the sector. About €750 billion of assets are located in Ireland in Section 110s. The Revenue Commissioners recently confirmed that a large number of Irish SPVs are facing financial audits.

Burlington was previously owned on behalf of Davidson Kempner by the Matheson Foundation, a charity linked to Dublin commercial law firm and tax adviser, Matheson. Its shares were since transferred, however, to Deutsche group.

The Charities Regulatory Authority recently said it is reviewing the use of registered charities in this way.

While the systemic risks posed by SPVs to the wider Irish financial sector are unknown, the only real benefit to the Irish economy comes in the form of fees to the local law and accounting firms that advise them.

Burlington, for example, has just two staff in Ireland. In April this year, it shifted its administration to a company in the Cayman Islands.

Two Irish directors nominated to sit on its board each received fees of $18,000 last year, according to Burlington’s accounts.

It is registered to an address in the Eastpoint Business Park that is also used by 472 other companies.

1 Michael Smurfit: ‘I asked Trump to invite me to the White House for my 80th birthday’
2 ‘The recovery needs to be a full-scale economic renewal’
3 Small businesses are cannon fodder in zealous anti-virus experiment
4 ‘I’m so lucky to be in the Caribbean – a million miles from Derry Girls’
5 ‘Never mind GDP; the most fundamental job of any leader is to keep his people alive’
6 Ireland stands to benefit in a big way from investing in public transport
7 Consumers hesitant about travel as Covid-19 restrictions ease
8 Minister calls for EU to act against tobacco firms ‘undermining’ menthol ban
9 Household savings soar as consumers stop spending
10 Ryanair expects air fares to fall when flights take off again
Real news has value SUBSCRIBE