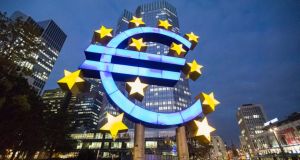 In spite of repeated attempts, Rob Wright declined to offer a view on whether it was acceptable for the European Central Bank to decline a request to attend the inquiry.

Day two of the banking inquiry. This time its was the turn of Canadian Rob Wright to face nearly four hours of questioning from the committee about a report he compiled in 2010 following a review of the department of finance by a panel he led. He painted a gloomy picture of the workings of the department in the years leading up to the financial crash in late 2008.

Morale was low, the department was not properly structured or managed and staff were fearful of giving written advice which could possibly get into the public domain and potentially embarrass their minister.

There was also a lack of certain skills. Just 39 economists of master’s level out of a headcount of 542 – 7 per cent of the total, compared with 60 per cent in Canada. Wright recommended this should be doubled within two years, but this level has yet to be achieved.

Separating out the treasury function to the National Treasury Management Agency had stripped the department of valuable experience and skills, with the two operating independently of each other.

To highlight the dysfunction within the department, Wright said many staff went home on budget night to find out from TV coverage what was actually included the budget.

He reminded the committee that government spending averaged 12 per cent a year in the decade up to 2008, when the wheels came off the Irish economy.

With control of interest rates handed over to Frankfurt when the euro was set up in 1999, Wright said it was ever more important for the department to take measures to cool the “exuberance” that was evident in the economy.

He would have pushed the metaphorical “red button” to make this happen but it never did, in spite of some staff voicing their concerns. Wright was also critical of the social partnership process, which he said began well in the late 1980s but ended up adding to the spending and wage pressures as the economy was overheating.

Wright knows a thing or two about running a finance ministry, having effectively been the secretary general to this department in Canada during a long career as a public servant.

While there was much negativity about how the Irish department of finance previously operated, Wright said there were many “good people” working there who applied themselves diligently. He described the late minister for finance Brian Lenihan as “very impressive”.

Wright’s long experience as a public servant helped him deflect certain questions. In spite of repeated attempts, he declined to offer a view on whether it was acceptable for the European Central Bank to decline a request to attend the inquiry. Wright’s panel came up with no fewer than 50 recommendations but he would not say how many had been implemented, saying it was a question best put to the department.

However, “some important progress” has been made, notably in beefing up the number of economists in the department, professionalising its human resources structure and making changes to the timing of the budget and the process around it. He also noted the NTMA and Department of Finance now worked together more closely.

Wright also cautioned the current Government to be careful not to repeat the mistakes of the past, as pressures re-emerged to increase wages and spending on services now that a recovery was under way.

Wright’s appearance before the inquiry involved thrashing over a lot of old ground. The Canadian let out an audible sigh before taking questions from Fine Gael’s Eoghan Murphy, last in line of the 11 committee members to ask questions. Each member was then allowed a second round of questions before proceedings wound up.

The committee now takes a break until mid January when Governor Patrick Honohan will appear to discuss his report on the crash.

There will then be another two months of the so-called context phase to set the scene for the crash before moving on to the meatier nexus part of the inquiry, where bankers, auditors and politicians will be called to give their account of events. It’s an awful lot of context.