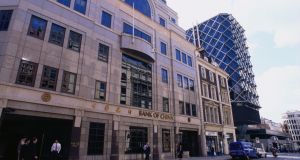 Bank of China (UK) Limited, based in London, filed an application to register a branch in Ireland last month. Photograph: Getty Images

Bank of China, the 64 per cent state-owned bank, has applied to set up an Irish branch of its UK operation to capitalise on growing commercial links between this State and the world’s second-largest economy.

Bank of China (UK) Limited, based in London, filed an application to register a branch in Ireland last month, while it has also notified the Central Bank this year of its intention to set up in the State under European Union financial services passporting arrangements. However, the Beijing-headquartered bank would not be able to maintain such an operation in Ireland in the likely event there is a “hard Brexit” and the UK loses EU passporting rights.

Business links between Ireland and China have grown apace in the past five years, following a visit of then-Chinese vice president, Xi Jinping, to Ireland in February 2012, just over a year before he became the country’s president. Taoiseach Enda Kenny and President Michael D Higgins have since made official visits to China while the country’s premier, Li Keqiang, visited Ireland two years ago, within months of his nation lifting a ban on Irish beef.

Bord Bia former chief executive Aidan Cotter has predicted that China, currently Ireland’s second-largest market for pork and dairy foods, will become the country’s first billion-euro market for Irish food and drink exports outside of the UK by the end of the decade. Ireland exported €845 million worth of food and drink products to China last year, with the figure having grown six-fold over six years.

In December, China General Nuclear Power’s European energy arm signed a €400 million deal to acquire 14 Irish wind farms, with capacity to power about 120,000 homes, from renewable energy specialist Gaelectric. The same month, China eased the way for Irish investors to access the country’s capital markets as it gave the country an investment quota worth the equivalent of €6.8 billion under its so-called Renminbi Qualified Foreign Institutional Investor scheme.

Bank of China already has a presence in Ireland through its aircraft leasing operation, BOC Aviation (Ireland) Ltd, which posted $105.6 million (€99 million) profit in 2015 on $286.7 million of lease rental income. The unit, which has been in operation for over two decades, had nine employees at the end of that year, according to its most recent set of financial accounts.

While its annual report, signed off in April, said the company was “giving consideration” to the potential impact of the then-upcoming Brexit referendum, it added that Chinese-UK relations were at the beginning of a “golden era”.