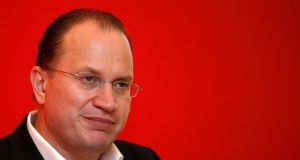 The bank said Mr Tucker (59), who is chief executive of AIA Group and former head of Prudential, would step into the role on October 1st, 2017.

One of Mr Tucker’s most important tasks will be to find a successor to chief executive Stuart Gulliver, who has led the London-based bank for more than six years. A replacement is due to be announced during 2018 in order to meet Mr Gulliver’s stated desire to retire in that timeframe, HSBC said.

HSBC, one of the world’s largest lenders with about 235,000 employees in some 70 countries, is restructuring to adapt to tougher regulations and a law requiring the separation of its retail operations from the investment bank in the UK. It also has a legacy of failed compliance and misconduct.

The bank remains under the watch of the US justice department after helping South American drug cartels launder money. It is also facing moderating economic growth in China and the prospect of a post-Brexit slowdown in the UK, its two most important regions.

Mr Tucker played professional soccer in his early life and was on several UK teams including Wolverhampton Wanderers, Rochdale and Barnet, according to reports from the Daily Telegraph. He switched to finance after attending the University of Leeds. He was finance director at HBOS, as well as his leadership jobs at Prudential and AIA.

Since 2011, HSBC has announced more than 87,000 job cuts and exited more than 80 businesses, reducing its global footprint.

Alongside most other European banks, its executives have been struggling to increase profitability faced with record-low interest rates, misconduct fines and rising compliance and regulatory costs.

HSBC rose 0.9 per cent to 672.7 pence in early London trading, bringing its advance this year to 2.4 per cent. AIA dropped 3 per cent in Hong Kong, the most since December.