EY Entrepreneur of the Year: 24 firms shortlisted for award

Finalists employ more than 5,000 people and generate annual revenues of over €475m 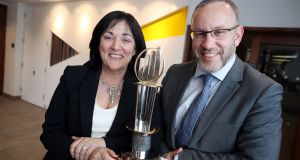 The shortlist for the 2017 EY Entrepreneur of the Year awards, which is celebrating its 20th anniversary in Ireland, has been announced with 24 companies selected to compete across three categories.

The overall winner of the programme, which works to recognise, promote and build a supportive community around Ireland’s high-growth entrepreneurs, will go on to represent Ireland at World Entrepreneur of the Year in Monaco in June 2018.

Representing the full spectrum of industries from across Ireland, this year’s finalists employ more than 5,000 people and generate annual revenues of more than €475 million. The finalists were selected by a judging panel chaired by 2006 EY Entrepreneur of the Year Anne Heraty, who is chief executive of CPL Resources, in three categories – Emerging Entrepreneur, Industry Entrepreneur and International Entrepreneur.

As part of the awards, the finalists will take part in a 10-month development programme. They will also join more than 70 other entrepreneurs for a week-long “CEO Retreat” to San Francisco later this month.

The theme of this year’s programme is “Leading through Change” in recognition of the significant changes that have occurred within the business community over the past 20 years and of future disruption to come.

“This year’s finalists were chosen because they have demonstrated the ability to navigate change as business leaders and, as such, they represent the very best talent within Ireland’s entrepreneurial community today,” said Kevin McLoughlin, EY partner lead for the awards.

“We are also pleased to see strong female representation within the finalists this year. We look forward to seeing this diversity grow further year-on-year as an increasing number of female-led entrepreneurial businesses make waves across Ireland,” he added.

The finalists in the international category are: Harry Hughes of Portwest; Mark Barrett of APC; Darragh Cullen of Edge Innovate; Brendan Monaghan of Neueda; Fergus and Frances McArdle of Height for Hire; Jane Gallagher and Roisin Callaghan of Cogs and Marvels; Kevin O’Loughlin of Nostra; and Alan Foy of Blueface.

As the finalists progress through the programme, the judging panel will determine the winners based on a number of criteria, including innovation, value creation, strategic direction, financial performance, national and global impact and the entrepreneur’s contribution to society and industry.

The category winners and an overall “2017 EY Entrepreneur of the Year” award winner will be announced at a ceremony in Dublin in October.