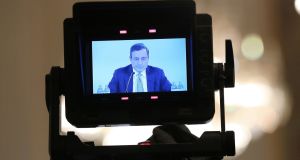 Mario Draghi, president of the European Central Bank (ECB), during a news conference to announce the bank’s interest rate decision in Vienna, Austria, on Thursday.

Mario Draghi has cautioned that the pace of the euro zone’s recovery may be slowing, as the European Central Bank kept interest rates at record lows.

Meeting in Vienna, the ECB played down hopes that growth in the single currency area was gaining momentum and left inflation and growth forecasts largely unchanged despite a strong start to the year.

The bank’s governing council also held back from allowing Greek banks to resume access to cheap loans – frustrating Athens’ hopes that it would take such a step this month.

Athens believed the ECB governing council would use the Vienna meeting to reinstate a waiver allowing it to accept Greek government bonds as collateral for cheap ECB loans, despite the bonds’ “junk” credit rating. Greek optimism stemmed from last week’s deal to release €7.5 billion in EU bailout funds next month, after a long stand-off.

Instead Mr Draghi, ECB president, said while they discussed the waiver, no decision would be made until Athens completed all elements of the first review of its €86 billion bailout, a prerequisite to getting the €7.5 billion tranche.

On the euro zone’s growth prospects Mr Draghi said: “The risks to the euro area growth outlook remain tilted to the downside, but the balance of risks has improved.” He warned second-quarter growth would “possibly [be] at a lower rate than in the first quarter”.

The region grew by 0.5 per cent between the fourth quarter of 2015 and the first quarter of this year, outpacing the US and the UK and fuelling expectations that the single currency area’s sluggish recovery had reached a turning point.

But while the ECB edged up its projections for growth and inflation this year to take account of higher oil prices and the strong start to the year, its economists’ forecasts for both variables for 2017 and 2018 were left virtually unchanged; by contrast with more bullish sentiment in the markets.

Mr Draghi added that the bank expected 1.6 per cent growth this year, compared with its March estimate of 1.4 per cent. His tone, and his staff’s economic forecasts, suggest the ECB remains unconvinced the euro zone’s recovery has switched to a higher gear.

Some of those measures will only be implemented this month, with the ECB saying it would begin to buy high-grade corporate bonds on June 8th as part of its expected €1.7trillion quantitative easing programme and hold, on June 22nd, the first in a series of four auctions of central bank cash which will, in effect, subsidise banks to lend to businesses in the currency area.

Mr Draghi said his central bank was “willing, able and ready” to act again, should those measures leave inflation short of the target.

The ECB’s governing council left the main refinancing rate at zero, where it has been since March. The deposit rate imposed on banks’ reserves parked at the ECB stayed at 0.4 per cent.

1 Could your old car be giving away all your secrets to its new owner?
2 Brexit: System agreed for Irish goods to skip checks on UK trade
3 Second Covid-19 outbreak and no-deal Brexit an appalling vista
4 Vodafone to speed up 5G rollout using new technology
5 Why are markets booming when a crash is on the way?
6 No free lunch on coronavirus cash payments
7 Citi Europe head sees Irish economy among fastest to bounce back
8 Ireland faces 'deep downturn' this year and may not rebound until 2024 if there is a second wave
9 Supreme Court in Dublin clears Bernie Madoff Ponzi loss case for hearing
10 Where is Ireland’s contact tracing app?
Real news has value SUBSCRIBE