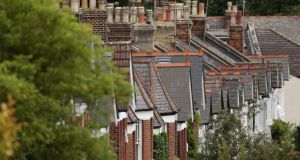 In a submission to the Central Bank’s consultation on proposed mortgage restrictions, the ESRI said it was not clear that new loan-to-value and loan-to-income caps were “fully warranted” in current market conditions. Photograph: Yui Mok/PA Wire

The Economic and Social Research Institute has questioned moves by the Central Bank to damp down the housing market, saying immediate measures to restrict mortgage lending could curtail the supply of new homes.

Although the ESRI argues that a new mechanism to counter excess credit would provide the “only real protection” against another credit-fuelled bubble, it has taken issue with the specific plan advanced by the Central Bank.

In a submission to the bank’s consultation on proposed mortgage restrictions, the think tank said it was not clear that new loan-to-value and loan-to-income caps were “fully warranted” in current market conditions.

“We would be slightly concerned about implementing the measures given the present levels of housing supply because we feel that these measures do send a very, very strong signal to all agents in the market,” said ESRI research professor Kieran McQuinn.

“It does send a strong signal about potential affordability and the impact on prices next year, and this, we feel, may have a distortionary effect on supply at a time when supply is the key and crucial issue.”

“There’s obviously been very strong price growth over the last 12 months in the Dublin area, I think that’s beyond any shadow of a doubt.

“However, we still think that prices still certainly appear to be at the very least warranted by fundamentals,” Dr McQuinn said.

However, the ESRI called for a rules-based system to tighten loan caps if agreed indicators point to excess credit, and loosen them if the opposite is the case .

Dr McQuinn was speaking as the ESRI said Budget 2015 was “somewhat less cautious” than it would have preferred.

Forecasting 4.5 per cent growth in gross domestic product next year and a dip in unemployment to 9.5 per cent, the ESRI said the budget would increase the estimated deficit to 2.4 per cent of economic output from 2.1 per cent.

It noted, however, that this remained within the 3 per cent deficit the Coalition must achieve to comply with EU rules.

On revisions to the water scheme, the ESRI said the revenue impact is now likely to be less positive than previously expected. “Lower revenues from water charges must be offset by a compensatory increased subvention from the Exchequer,” said the ESRI winter commentary.

His colleague, David Duffy, said a “back of the envelope” calculation suggested the estimated 2015 deficit would rise to 2.7-2.8 per cent if the liabilities stayed on the balance sheet.

“If it does come off balance sheet it does have an impact, although the Government do still meet the deficit target.”