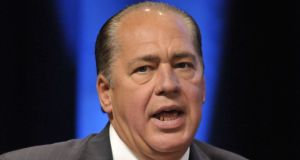 Governor of West Virginia Earl Ray Tomblin: “Ireland has done a great job in setting competitive prices and we’re trying to do more of that.” Photograph: Jim Stem/Bloomberg

Donald Trump has made plenty of outlandish promises during the US presidential campaign. A vow to bring back coal mining jobs to West Virginia might not rank among the worst of them, but it has certainly led to a headache for the state’s governor.

Earl Ray Tomblin, a Democrat who was has been governor of West Virginia since November 2011, is involved in a concerted effort to encourage international investors to the state as it seeks to diversify away from coal. However, Trump’s commitment to reopen mines has gone down well with disillusioned voters who do not hold out much hope for Tomblin’s promise of a brighter tomorrow.

“Coal has taken care of people in this state for generations, from the time they left school to their graves, but those days are gone and some people don’t want to believe it,” Tomblin tells The Irish Times on a recent visit to Dublin. “I hate it as much as they do because I come from a mining region, but there’s no magic wand that can be waved that will put miners back to work, which is why there is little choice other than to try to diversify.”

West Virginia may not be particularly well known to most people in Ireland but politicians there sure know a lot about us. The US state is looking to Ireland as a role model as it seeks to move away from coal and encourage companies in other sectors to set up shop in the region.

“We’ve learned that there are a lot of similarities between Ireland and West Virginia,” Tomblin says. “Ireland has very smartly been able to successfully position itself as a small country in a very big economy. We are trying to do something similar by repositioning our economy away from coal. I think we have the assets to do it.”

West Virginia historically has thrived on traditional energy and manufacturing industries such as chemicals and polymers, aerospace, automotive and wood products. However, the state is increasingly seeking to attract innovative, technology-based businesses that will provide a more sustainable economic future.

Lower energy prices, technological improvements in the oil and gas space, and tougher environmental laws mean that West Virginia has no choice but to make itself less dependent on coal. However, with the energy sector still accounting for about 17 per cent of the state’s GDP – even after the closure of many mines and a 40 per cent drop in exports – saying goodbye to the black stuff isn’t easy.

According to the Energy Information Agency, West Virginia ranked fourth among all states in total energy production in 2013, producing 4.6 per cent of the nation’s total. The state currently provides 15 per cent of the entire US coal supply. However, production has declined sharply in recent years, from a peak of 158 million tonnes in 2008 to a projected 73 million tonnes this year.

“We realise that we’ve got to change but that takes a little bit of time,” Tomblin says. “Everyone still associates West Virginia with energy; it is like the 800lb elephant in the room. It is there and we would to be idiots not to continue to take advantage of the resources we have. But we have also become a more diversified economy in recent years.”

Since 2005, West Virginia has seen more than $22 billion in new business investments. More than 140 global companies now have operations in the State with firms such as Amazon, Bayer, Toyota, Procter & Gamble, Macy’s and Lockheed Martin among them. Irish firms such as Ardagh Group, CRH/Oldcastle Precast and Randox Laboratories also have a presence there.

The state is seeking to further boost investment, hence the trade mission to Britain and Ireland.

“Ireland has done a great job in setting competitive prices and we’re trying to do more of that,” the governor adds. “We’ve reduced business taxes from 9.5 per cent to 6 per cent in recent years, introduced programmes to retrain people, and like Ireland, have tried to create flexibility and stability so that companies considering West Virginia know what to expect.

“We don’t see Ireland as a competitor but as a country we can learn from. We’ve paid a lot of attention to what it has done to attract international investment and during this visit have met with the IDA to discuss what we have in common and how we can work closer together to benefit both sides.”

Emerging sectors in West Virginia include plastics, biometrics and biosciences, advanced energy, distribution and business and information services. It is also doing more to promote tourism in the region and has become something of a hub for government agencies who want to be close to Washington but far enough away in case of a terrorist attack.

“The federal government has been moving critical operations to states like West Virginia, which is only 45 minutes away by air and a couple of hours away by road. The US treasury has a major presence here, as does the National Oceanic and Atmospheric Administration [NOAA)]and the FBI, through which we have the largest fingerprint repository in the US.”

Nonetheless, with so many job losses arising from the mining sector and not enough new ones to go around as yet, Tomblin’s strategy has not met with widespread praise. The Democrat recently risked further ire by voicing his support for Hillary Clinton for president, in a state that has shown strong support for her opponent.

“Trump will carry West Virginia but we’ll have a Democratic governor for the state and a Democratic president,” he says. The incumbent, who is not running for re-election due to term limits, may be exasperated by Trump’s comments, but he says that in terms of investment opportunities, they are more of a distraction than a threat.

“There’s been plenty of anti-trade talk in these elections but I’d say you guys have bigger worries with Brexit than we do with Trump.”