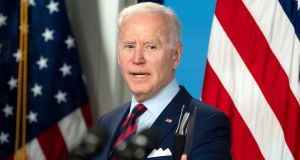 US President Joe Biden’s broader goal is to end what officials have described as a race-to-the-bottom on global taxation. Photograph: Leigh Vogel/Pool/EPA

The Biden administration is calling for the world’s biggest multinational companies to pay levies to national governments based on their sales in each country, as part of an ambitious proposal for a global minimum tax.

The plan would apply to the global profits of the very largest companies, including big US technology groups, regardless of their physical presence in a given country.

The US Treasury laid out its proposal in documents obtained by the Financial Times, which had been sent to the 135 countries negotiating international taxation at the OECD in Paris.

The plan faces an uphill battle through the US Congress. But an agreement at the OECD would allow Joe Biden, US president, to increase corporate taxes on US companies without being undercut by other countries because it would include a global minimum tax rate.

The US move during the week of the IMF and World Bank spring meetings comes as the White House has also called for raising US corporate taxes by about $2.5tn over the next 15 years to pay for more than $2tn in investments in infrastructure, clean energy and manufacturing.

Biden hopes the promise of a more stable international tax system will stop the proliferation of national digital taxes and break the mould of tax avoidance and profit-shifting.

Washington has threatened to apply tariffs to countries including France, the UK, Italy and Spain, among others, over digital taxes which US tech companies are being asked to pay.

Ireland, which has a headline corporate tax rate of 12.5 per cent and has been one of the biggest beneficiaries of multinationals’ profit-shifting techniques, declined to comment on the US proposals.

But the finance ministry said it was “constructively engaging in these discussions”.

The plan was welcomed by the Netherlands, which has also benefited over many years from corporate tax rules that have been attractive to multinationals.

Hans Vijlbrief, the Netherlands state secretary for finance, said it was a “huge step towards finding global solutions and developing effective rules” which was “fully in line with the efforts made by the Netherlands to modernise the international tax system”.

“This will certainly contribute to our government’s efforts to counter international tax avoidance by companies and harmful tax competition between states,” he said.

After nearly a decade, the OECD tax negotiations have been broken up in two parts. The first pillar is designed to set a new regime for taxation of the largest multinationals, while the second pillar addresses the global minimum tax rate, which the US aims to see at 21 per cent.

If the US plan were accepted, other countries would be able to increase revenues from big US tech groups and other multinationals that operated in their jurisdictions but paid little corporate tax.

Mario Draghi, Italy’s prime minister, who also chairs the G20 this year, said he was “fully behind [THE US]call for a global minimum corporate tax”. As one of the countries that has introduced a digital tax, Italy’s support for the US proposals will be important in securing a wider consensus.

The UK Treasury welcomed the US administration’s “renewed commitment to reach a global solution” and said that “updating the international tax rules to ensure that digital businesses pay more tax in the UK, in line with their economic activities, remains a UK priority”.

The offer from Washington reflects Biden’s broader goal of ending what officials have described as a race to the bottom on global taxation that has deprived governments of revenue needed to fund basic services and investments.

The Trump administration had insisted on a “safe harbour” provision that would make compliance by US technology groups voluntary. Biden dropped that demand, but this week’s proposal offers a new solution.

The US Treasury is now offering a formula in which only the very largest and most profitable companies in the world would be subject to the new rules, regardless of their sector, based on their level of revenue and profit margins. These would probably include about 100 companies, comprising the big US tech groups as well as other extremely large multinationals.

The proposals have already been shared with the OECD, which is convening the negotiations and is trying to bring countries together to generate the outlines of a global deal by the summer.

Pascal Saint-Amans, head of tax administration at the OECD, welcomed the US proposals. “This reboots the negotiations and is very positive,” he said. “It is a serious proposal with a chance to succeed in both the [international negotiations] and US Congress. Peace is more important than anything else and this would stabilise the [international corporate tax] system in the post-coronavirus environment.”

Saint-Amans added that the proposal was likely to raise as much revenue for other countries as the OECD’s own suggestion, while also allowing the US to raise the money it wanted from its largest companies.

Robert Atkinson, president of the Information Technology and Innovation Foundation, a tech think-tank, warned that the proposal “would not only be discriminatory, as it selects certain firms for higher taxes, [BUT]it would be against US interests, as presumably much of the increased tax would be imposed on US technology companies doing business in other nations”.

“If such a proposal were to be put in place it should apply to all firms,” he said. – Copyright The Financial Times Limited 2021