US and China reach truce in trade war 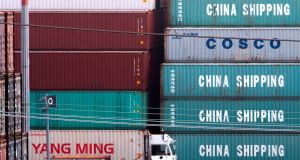 US and Chinese officials are expected to finalise the text of the limited agreement in the next five weeks. Photograph: Getty

The US and China reached a truce in their trade war after Washington agreed to a limited deal involving relief from looming US tariffs in exchange for some Chinese concessions, primarily on agricultural purchases.

The tentative agreement – described on Friday by Donald Trump, the US president, as a “substantial phase one deal” – will offer some respite to the global economy and could calm markets unnerved by escalating tensions between the countries.

However, it would not represent the sweeping reset in US-China economic relations that Mr Trump has sought from his early days in the White House, and on the 2016 presidential campaign trail.

US and Chinese officials are expected to finalise the text of the limited agreement in the next five weeks, ahead of a possible summit between Mr Trump and Xi Jinping, China’s president, in Chile next month.

While China would make some additional purchases of farm goods, particularly soyabeans and pork, and agree to some new measures on intellectual property, currency and financial services, it has been unwilling to offer any big shake-ups to its industrial subsidies and other practices that have long frustrated US officials and companies.

Mr Trump had stoked confidence in a truce with a series of tweets as the negotiations unfolded.

“Good things are happening at China Trade Talk Meeting. Warmer feelings than in recent past, more like the Old Days. I will be meeting with the Vice Premier today. All would like to see something significant happen!” he wrote on Friday morning.

US stocks trimmed their advance following the news.

When asked to comment on the optimism in the markets about the prospects for a deal earlier on Friday, Steven Mnuchin, the US Treasury secretary, responded: “The stock market is always right.”

Mr Mnuchin and Robert Lighthizer, the US trade representative, negotiated the truce with Liu He, China’s vice-premier.

But some economists worried that the agreement would be too limited to remove all the uncertainty hanging over the US-China relationship. – Additional reporting by Peter Wells in New York