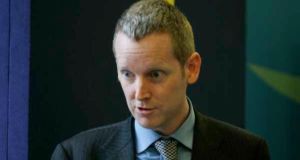 EIB vice-president Andrew McDowell: “Ireland has been underinvesting in infrastructure for so long now that soon there will be unavoidable long-term consequences for future economic growth.”

The Republic must urgently invest in capital infrastructure to deal with changes to trade flows after Brexit or there will be “unavoidable long-term consequences” for growth, the vice-president of the European Investment Bank (EIB) has said.

Andrew McDowell, speaking at a conference on investing in the future of Europe on Thursday, said infrastructure was the “key element” that needed “much higher financing” if the recovery was to be sustainable.

“Ireland has been underinvesting in infrastructure for so long now that soon there will be unavoidable long-term consequences for future economic growth,” he said.

The EIB supports projects which contribute to economic growth and provide employment. It has extended more than €15 billion to the State since 1973, and recently announced a record financial package of €405 million for social housing.

Mr McDowell said the “big risk” in relation to Britain’s exit from the European Union was that it would “change Ireland’s trade routes”.

“New ports and airports and other infrastructure connections will be needed to accommodate this, which will add to the existing shortfall in infrastructure needs,” he said.

“Transport, education and health here have been severely hit during the crisis, while energy and digital technology infrastructure have also been falling behind.

“Investment in infrastructure such as roads isn’t just about providing jobs for the people who build the assets. There is a major impact on jobs and growth beyond the projects themselves and for a long time after the project is completed.”

He said the lack of investment in capital infrastructure was “the most acute shortfall” in public spending. “I don’t just mean roads,” he said. “I also mean social infrastructure, education, broadband, ports, and health infrastructure.

“Infrastructure preparation will take several years so we need to be on top of this right now with good planning, and marshalling all available resources. Without these investments, we risk stalling the recovery in the context of Brexit.”

However, Mr McDowell, who was a senior economic adviser to former taoiseach Enda Kenny, said the cost of infrastructure projects in the Republic was the biggest issue in terms of deliverance.

“We do find the cost of Irish infrastructure projects quite high,” he said. “Land is expensive. Labour is expensive. Certainly if you’re comparing costs in Ireland with somewhere in central or Eastern Europe, you’d expect to find it higher.”

Separately, Mr McDowell said he was “keen” to see a revision of the EU’s fiscal policy rules which “do not sufficiently incentivise protection of infrastructure investment and capital expenditure at times of economic stress”.

He said he would favour “some special treatment” within the rules for spending on capital infrastructure.

“I don’t think capital infrastructure spending should be flexed up and down to try and fine tune the economy,” he said. “There are other tools to help manage the economy. Tax is the obvious one.”

Meanwhile, the EIB announced a €200 million initiative with vendor finance company DLL, which is a subsidiary of Rabobank. It said the funding would strengthen leasing and financing for Irish SMEs and mid-cap companies in a range of sectors.