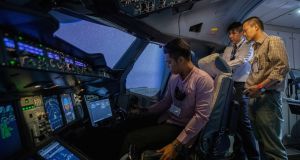 Image of the week: Flying in theory

Over in Australia, Qantas has been flogging its branded business-class pyjamas and old bar carts. But at the head office of Thai Airways in Bangkok, revenue-raising during a pandemic is a more elaborate affair. Pictured at the controls here is pilot Akarapol Apanant, but he’s not about to take off – he’s instead showing visitors to an Airbus A380 flight simulator how it all works, or used to work. Are you not a wannabe pilot but, for some strange reason, miss airplane food? Then your luck is in: Thai Airways is also operating a flight-themed restaurant complete with airline seats, cabin crew serving meals and boarding cards issued as souvenirs. Please come back cramped, turbulence-dodging queue for the in-flight toilet, all is forgiven.

In numbers: Top of the K-pops

Percentage of Big Hit sales accounted for by BTS, aka the “Korean Beatles”, making the enduring popularity of the seven-piece sort of important for its stock market success.

BTS are worth this much to the Korean economy, according to a report released by the Hyundai Research Institute in 2018. It’s a lot.

Getting to know: Bob Wilson and Paul Milgrom

Paul Milgrom is an economist at Stanford University, California, who likes to keep his phone on silent mode. Bob Wilson is an economist at Stanford University who sometimes unplugs his home phone when it rings. Luckily, the committee of the Sveriges Riksbank Prize in Economic Sciences in Memory of Alfred Nobel, better known as the Nobel prize for economics, were able to get through to Bob’s wife Mary. And so, late at night, Bob found out that he and Paul had won the Nobel. But how to tell his former student the news? It fell to a pyjama-clad Bob, accompanied by Mary, to venture across the street to Milgrom’s house where after much buzzing and knocking, he finally answered in an exchange captured by his doorcam. “Paul, it’s Bob Wilson, you won the Nobel prize,” to which Milgrom replies, “yeah, I have? Wow.” The pair were given the nod for their work on auction theory and improving auction formats, which has been used for everything from fishing quotas to aircraft landing slots.

For anyone who ever wanted a list of the 100 richest self-made women based in the United States, Forbes has done the annual honours. So which names were new for 2020?

1. Maria Sharapova. Despite retiring from professional tennis at the start of the year, the Russian-born ex-player is doing well for herself and is worth $200 million, says Forbes.

4. Gwynne Shotwell. Forbes estimates that Shotwell owns about 1 per cent or $290 million worth of SpaceX, Elon Musk’s commercial space exploration company, of which she is chief operating officer.

5. Donna Carpenter. The source of Carpenter’s $530 million wealth is listed as “snowboards”, which couldn’t be cooler, obviously.

1 Hurrah for the companies giving staff more time off
2 RTÉ to seek 70 voluntary redundancies as ‘large costs’ beckon in 2021
3 Covid-19 will worsen shortage of accountants, says CPA Ireland
4 Some Irish money market funds came close to danger in March
5 ‘We lost money on our planned wedding in Spain. Covid saw to that’
6 Start-up Loanitt raises €570,000 as it looks to double headcount
7 How long can Government afford to keep State pension age at 66?
8 How to make the hybrid workforce model work
9 Policy failed us during the banking crisis and it’s failing us again
10 Sustainable investment: How your pension can help tackle climate change
Real news has value SUBSCRIBE