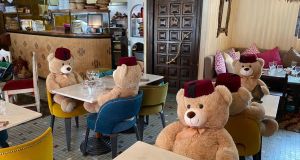 In this London restaurant, bears are used to reinforce the need for diners to socially distance. Photograph: Zizou Hammoudi/PA Wire

Image of the week: Bear essentials

If Dublin is so great, then how come it’s not possible, at the time of writing, to have a mid-pandemic meal in the city accompanied by giant teddy bears? All across Europe, cuddly yet clearly hungry toys have been deployed as social distancing devices in restaurants – these ones are fans of the north African cuisine in Tagine, in Balham, south London, where owner Zizou Hammoudi claims that as well as keeping post-lockdown customers apart from one another, the bears help to relax them. Unless they turn out to be superspreaders, an ursine invasion of Ireland’s part-open, much-suffering hospitality sector is surely only a matter of time.

Irish people who told a new survey by PeopleSource that they want to continue working from home (WFH) at least two days a week.

People who told a recent survey by AIB that they wanted to go back to how their working lives were before the pandemic.

Proportion of people who, in April, told an IrishJobs.ie survey that they were working longer hours at home than they would in a “normal” pre-pandemic office day.

Getting to know: Jim Farley

Jim Farley, the incoming chief executive of Ford, lists Ford’s competitors as “Amazon, Baidu, Tesla, Apple, Toyota and others”, this motley crew being notably heavy on tech companies. Toyota, where Farley started his career, is the only traditional car manufacturer to make the cut. At Ford for 13 years, Farley’s ascent to the top job comes more than a hundred years after his grandfather, Emmet Tracy, started working for Henry Ford at his River Rouge plant in Michigan. But that’s history: Farley (58) is now tasked with giving Ford a place on the electric car and autonomous vehicle starting lines. The American is euphemistically described as having a “more direct” communication style than outgoing CEO Jim Hackett, as well as being an intense and passionate “car guy”.

Microsoft, somewhat surprisingly, is sniffing after TikTok, the Chinese-owned short form video app that has become the latest social media hit with Generation Z. But what other companies has the software giant picked up over the years?

1. Nokia mobiles. Only people who worked for the former handset giant remember that the outcome of its fade from mobile device glory was its acquisition by Microsoft in 2013.

2. Forethought. In 1987, Microsoft had the foresight to buy Forethought, developers of a software programme called PowerPoint. Next slide, please.

3. Hotmail. In the pre-Gmail (indeed pre-Google) days of 1997, everybody on the internet had a Hotmail.com account, so Bill Gates saw out the year by spending $500,000 on it.