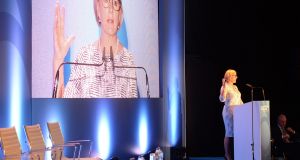 Julie Sinnamon: said Enterprise Ireland had recalled its global staff home for a week-long think-in at the start of October to identify new markets and reduce Ireland’s reliance on the UK. Photograph: Eric Luke

Julie Sinnamon said exporters should continue diversifying into other markets rather than waiting for the outcome of Britain’s exit negotiations with EU.

Speaking at The Irish Times Brexit Summit in Dublin, she said the UK’s share of Irish exports had already fallen from 45 per cent to 37 per cent in the past decade.

This trend is likely to be accelerated by Brexit, Ms Sinnamon said.

“Accelerating our market diversification plans is already bearing success, opening doors of opportunity for Irish companies across the globe, in the euro zone, North America and Asia,” she said.

Ms Sinnamon said Enterprise Ireland had recalled its global staff home for a week-long think-in at the start of October in a bid to identify new markets and reduce Ireland’s reliance on the UK.

Also speaking at the event, chief executive of solar energy firm Amarenco John Mullins said Brexit had the potential to slow the move towards an all-island energy market.

At the same time, it will make euro assets more attractive and, in turn, investment in Irish energy projects more likely, he said.