Jobless rate holds steady at 4.9% but economists warn next year could be challenging 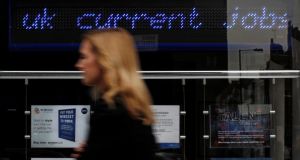 There were 106,000 more people working than in the previous three months and 10,000 more classed as unemployed. Photograph: Suzanne Plunkett/Reuters

The unemployment rate held steady at an 11-year low of 4.9 per cent in the three months to the end of August, which covers two months after the Brexit vote.

There were 106,000 more people working than in the previous three months and 10,000 more classed as unemployed. While this represents a slight slowdown in jobs growth, it was better than economists had expected.

“The overall message of this report is that the labour market is still showing no signs of post-Brexit downturn – life goes on,” said Alan Clarke, an economist at Scotia Bank. But he warned: “Next year could be challenging; how challenging will depend on what happens to wages.”

Wage growth remained weak at 2.3 per cent, roughly half the rate that was typical before the financial crisis. Economists are worried that rising inflation will soon start to squeeze workers’ spending power.

“Unless we see a significant step up in pay settlements soon, we risk being on course for a fresh pay squeeze next year, having barely recovered from the last one,” said Matt Whittaker, chief economist at the Resolution Foundation think tank.

Figures for Northern Ireland showed an unemployment rate of 5.5 per cent, higher than the UK average. The data also showed that the number of people claiming jobless benefits in the North fell last month by 400 to 34,900.

Average wages in th UK fell about 8 per cent in real terms in the six years after the financial crisis, pushing living standards to their lowest in a decade. They have started to recover in the past two years, thanks to very low inflation.

However, inflation has now risen to 1 per cent and – with sterling fluttering around a record low after the Brexit vote – economists expect it will be between 3 and 4 per cent by 2018. Unless employers offer bigger pay rises, inflation at this level will start to make workers worse off again.

Separate data shows that fears of higher inflation have started to hit British consumer sentiment for the first time since June’s Brexit vote.

Financial data firm Markit said its monthly Household Finance Index fell to a five-month low of 43.8 in October from 44.7 in September.

Concern about future inflation hit a 22-month high, with the index measuring expected living costs rising to 83.8, its highest since December 2014.

“For the first time since the vote to leave the EU, UK households saw a noticeable downturn in current finances during October,” Markit economist Philip Leake said. “Inflation appeared to be a key factor behind the financial strain.”

Sterling fell by more than 10 per cent against the dollar and the euro in the days after the vote, briefly jolting household confidence but having little impact on purchasing power.

Sterling staged something of a recovery on Wednesday, touching its highest in almost two weeks against the euro, holding on to its biggest one-day gain in months.

Having plunged to a record low last week on worries Britain was heading for a “hard Brexit”, prioritising tighter controls on immigration over access to the single market, the Bank of England’s trade-weighted sterling index jumped 1.4 per cent on Tuesday. It was flat on the day at 74.5 at the bank’s 4pm print on Wednesday.

In the markets, sterling was trading around 89.3p against the euro.