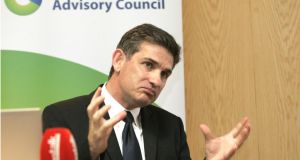 Chairman of the Fiscal Council Prof John McHale: told the Oireachtas committee that if forecasts for economic growth turned out to be accurate, then “everything was looking good”, but that it depended on growth. Photograph: Dara Mac Dónaill

Regulation may be needed to protect variable mortgages holders from being targeted by the banks for additional profits, the chairman of the Fiscal Council told an Oireachtas committee yesterday.

Prof John McHale was responding to Michael Creed (Fine Gael) who pointed out that the banks were increasing their variable interest rates at a time when the European Central Bank was lowering rates.

Policy
Speaking in a personal capacity, Prof McHale said the issue needed to be looked at closely from a policy perspective. The banks were under pressure to increase their profits, particularly because of the loss-making tracker mortgages they also had on their books. “Variable mortgage rate holders are very vulnerable, especially when they are in negative equity.”

He agreed with Richard Boyd Barrett (Not for Profit Alliance) that if forecasts for economic growth turned out to be accurate, then “everything was looking good”, but that it depended on growth. He said there should be €2 billion in consolidation measures in 2015, a neutral budget in 2016, and that there would be “limited room” for expansionary measures in the period to 2019.

Because the Government had gone for €2.5 billion in consolidation measures in the budget, rather than €3.1 billion as earlier expected, the margin of safety that had existed had been reduced in terms of achieving a 3 per cent deficit by 2016.

Credit line
Council member Donal O’Donovan said its members continued to believe Ireland would be better off with a precautionary credit line as it exited the bailout. Prof McHale, responding to Lucinda Creighton (Reform Alliance), said having a credit line would have given Ireland more assured access to the ECB’s Outright Monetary Transactions programme, in the context of a “systemic crisis” in the euro zone.

He said there was always a possibility of another “flare up” in the euro crisis. “Things can turn very quickly. So you need to think of how you can protect yourself.”

Kieran O’Donnell (Fine Gael) queried how the council could say there was an increased risk, after the budget, that the Government would not meet its deficit target for 2016, given the recent positive data on jobs and exchequer returns.

Council member Sebastian Barnes said Ireland’s public finances were expected to improve over the coming years but will improve less than they would have if the Government had adopted a €3.1 billion package in the recent budget.