Tax reform debate not a risk to Ireland, says US banking executive 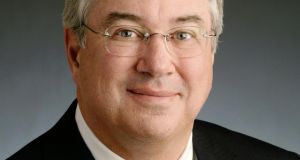 The fall-out for Ireland of controversy about the amount of tax paid by Apple and other US multinationals will be muted, according to one of America’s leading bank executives.

Jim Rohr, the executive chairman of PNC Financial Services Group, claims that there is no real appetite in the Obama administration to reform the way US corporations are taxed.

He also believes that an increase in Irish corporation tax would not necessarily reduce the attractiveness of Ireland as a location for US foreign direct investment.

“I think that to totally overhaul the tax system here would take a major change in thinking and the administration that is going to be here for the next three years has never expressed any serious interest in doing so,” said Mr Rohr, who stepped down as chief executive officer of PNC earlier this year. PNC has assets of $305 billion, making it the ninth-largest US financial services group.

Senate hearing
US corporate taxes were highlighted by a recent US senate hearing in which Apple acknowledge that it paid only 2 per cent tax on billions in revenues that were routed through Ireland. The response of Tim Cook, Apple’s chief executive, had broad support among the American business community says Mr Rohr, who was speaking ahead of a dinner this weekend at Notre Dame University for the finalists in the 2013 Ernst & Young Entrepreneur of the Year programme.

Any serious reform of the US corporate tax code would require a “crisis” similar to the 1980s when significant changes were made by the Reagan administration, he says.

“We had incremental rates of 70 per cent. Maybe we will get to that again, but talking to my friends in Washington they don’t perceive a grand bargain coming in the form of major changes in the tax code,” he added.

PNC Global Investment Servicing established a mutual fund administration operation in Ireland, which employed about 1,000 people and was sold to Bank of New York Mellon in 2010.

Mr Rohr is sanguine as to whether a 2 or 3 per cent rise in Irish corporate tax rates would significantly diminish the attractiveness to US corporations of Ireland as a location for investment.

“I don’t think it would. But I have to be careful as I only have my view of Ireland from when we [PNC]were there,” he said.

American corporations are interested in factors other than tax, such as time zones, language and the quality of the workforce.

Bigger threat
The no-tax policies of the current administration are arguably a bigger threat to foreign direct investment, according to Mr Rohr, who describes himself as an “independent” rather than a supporter of either of the large parties.

Small and medium-sized US businesses now consider government and regulatory issues to be the biggest risk to their business, according to a survey by PNC, he said. Five years ago it was technology and sales.