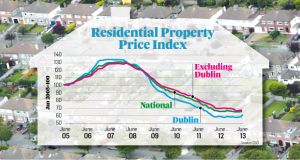 Property prices in June registered their highest monthly increase since the housing market crashed more than half a decade ago, new data from the Central Statistics office has shown.

Residential prices throughout the country rose by 1.2 per cent compared to May, and shpwed a similar rise year on year, the first time since 2008 that prices have risen over a 12 month period.

The June figures are further evidence that the halting of the precipitious decline in prices in the first half of 2012 represents a bottoming out of the market. Nationally, residential property prices have been broadly stable for more than a year.

The June increase marked the third consecutive month of rising prices. That followed four months in a row of declines, likely to have been caused by the ending of mortgage interest relief at the end of last year.

The CSO figures are disaggregated in a number of ways. The break down betwen prices in Dublin and values in the rest of the State showed that while increases were recorded in April, May and June on a month-on-month basis in both the capital and outside the capital, the Dublin market continued to show greater signs of recovery.

The rise in prices in Dublin between May and June was 1.7 per cent. In the rest of the country, the rise was less than half that, at 0.7 per cent.

Average prices in Dublin are now more than 5 per cent above their post-crash low point recorded in August of last year.

By contrast, prices in the rest of the country are only marginally above their nadir, which has hit in March of this year.

A further breakdown provided by the CSO is between apartment prices and house prices. Nationally, the former have been driving the overall stabilisation of the property market.

On a ntional basis, apartment prices have risen by almost 10 per cent since troughing in July of last year. National houseprices remain only a fraction up on their more recent low point.

While the CSO figures are viewed as the most accurate data series on the property prices, they include only properties that have been purchased by bank-supplied mortgage finance. With approximately half of transactions being conducted on a cash basis, there remains a gap in the comprehensiveness of the data.