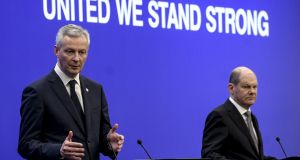 Outright opposition to the Commission’s short-term “interim” plans from states like Ireland and now reportedly Germany and the UK, who both signed up only a month ago to a declaration supporting digital taxation, make the required consensus improbable.

The Minister for Finance Paschal Donohoe told fellow ministers that Ireland believed only a global approach would work and strongly emphasised the OECD as the appropriate forum for such an approach.

The OECD’s blueprint for taxing the digital economy now expected next year.

“I asked if Europe was to move forward on a unilateral basis what reaction this might trigger elsewhere?” he told journalists in Bulgaria. “ I made the point that I attended the Asem [Asia Europe Meeting] ministers meeting on Thursday afternoon and it was noticeable that key partners did not support any interim measures.”

He warned that changing the tax model “could have very fundamental consequences in the long haul for the digital economy in Europe.”

The Commission’s strongest supporter is France and its President Emmanuel Macron whose finance minister Bruno Le Maire held bilateral talks with four of the most reluctant states, Ireland, the Czech Republic, Cyprus, and Malta to press his case.

Speaking after the ministers had met, he said EU member states should have “the courage to take their fate in their hands”.

“If you want to explain to citizens why you are not willing to tax digital companies, good luck,” Mr Le Maire said.

Although Germany’s new finance minister Olaf Scholz did not speak at the meeting on digital taxation, and dodged a question on Franco-German differences on the issue, sources were being quoted saying that Berlin has strong reservations about a tax on turnover rather than profits.

Angell Gurria, the secretary general of the OECD, hinted at his opposition to the Commission’s plans. He told journalists on the way in to the meeting that states should not introduce national short-term measures that would go against the logic of those likely to be proposed by the OECD.

He understood the need for short-term solutions to address revenue losses, but said that the OECD was considering bringing forward the publication of its blueprint from 2020 to next year.

The EU Commissioner for Economic Affairs, Pierre Moscovici, warned of “huge revenue losses” and the “need to fill the gap” in taxation. The Commission’s proposals, were “decisive and urgent” for a tax system that was “no longer fit for purpose”.

The alternative would be a “patchwork of national proposals”, he said. The Commission hopes that a decision can be reached by December on the interim measures.

The Commission is proposing two approaches to “digital tax”. On the one hand, a long-term attempt to get agreement that digital tax should be levied where the value added or profit is created and not at companies’ physical headquarters.

It proposes to create the idea of a “virtual tax presence”, taxing a company based on where its consumers are located rather than where it has offices, factories or employees.

In the interim, it is proposing a 3 per cent levy on specific aspects of internet companies’ activities which could raise up to €5 billion a year from the likes of Google, Facebook, and Apple.