Institutional complacency could yet threaten the euro zone

Wolfgang Münchau: Italian and French populists may yet have their say 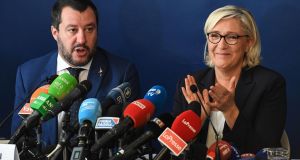 Matteo Salvini said recently that the euro was “absolutely irreversible”. The leader of Italy’s League party is not the only populist in Europe to have shifted tactics on the euro. Marine Le Pen, the French leader of the far-right National Rally, is no longer pushing for an exit from the single currency either.

Should we be relaxed? For as long as the European Central Bank provides unlimited support to the euro, the only conceivable threat to the cohesion of the eurozone can be political. If the leaders of the most Eurosceptic parties in the eurozone have given up the fight against the euro, then you would assume that this must be a cause for relief. But perhaps that assessment is still a little too complacent.

Feeling such relief would depend critically on how you define the threat to the eurozone and whether you take Mr Salvini at his word. We do not know what he may be thinking. Nor what he will be thinking when he finally achieves power. For all we know, he might by lying. What we do know is this: no politician ever succeeded by threatening to abolish the currency in which their voters receive their income and hold their savings. And here is the flipside: I am also sceptical about opinion polls that reflect a Panglossian view of attitudes to the single currency. The situation could change quickly in a financial crisis.

Mr Salvini’s views on the euro could also reverse at a moment’s notice. His economic advisers will still have their designs for a parallel currency in the drawer - the so-called mini-BOTs. They would give Mr Salvini the leeway for a fiscal loosening that he would lack if he came to power and tried to follow the EU’s rules on tax and spend.

Quitting the government in August proved to be a tactical error on Mr Salvini’s part and gave his opponents an opportunity to regroup. But he has since recovered ground in opposition. The Five Star Movement is still the single largest party in the Italian parliament. But opinion polls show a near total collapse in their support - ahead of two important regional elections in January. This is due to a combination of broken promises and Italy’s slowing economy.

The latest Italian polls have the League at 34 per cent, and its far-right allies, the Brothers of Italy, at just under 10 per cent. This would be enough for Mr Salvini to put together a governing majority under any conceivable voting system. (The far-right is near the peak of its popularity right now.)

In France, Ms Le Pen is very likely to contest the presidential elections in 2022. Emmanuel Macron has had a good presidency so far, but he is now running into strong domestic opposition to his pension reforms.

Ms Le Pen and her party are on the verge of joining the next stage of the trade unions protests against the reforms to form an anti-establishment alliance. She has become a more formidable opponent for Mr Macron since the last election, when she, too, gave conflicting messages on the euro. Without the threat to leave the eurozone, a more moderate Ms Le Pen could reach deeper into the centrist-conservative pool of voters. The latest poll has her at 45 per cent in any run-off with Mr Macron. This is not an unbridgeable gap.

The euro, meanwhile, remains unreformed. The banking system is in better health than it was in the crisis that started in 2008, but the banking union is incomplete. The ECB has warned that parts of the corporate sector may be overleveraged and vulnerable to a sudden or a long economic downturn.

Perhaps the biggest of the foreseeable risks is a deep technology shock. Germany’s three most important sectors - cars, mechanical engineering and chemicals - are declining. German carmakers have bet the house on diesel technology and are only now beginning to catch up in technological development of electric cars. Unemployment is already rising in regions with a high concentration of industry.

Complacent minds say the EU and its member states always undertake reform in difficult times: never let a crisis go to waste, is the mantra. I am not sure this is true any more, certainly not for the EU. I fear that the moment for deep eurozone reform has come and gone.

If and when the populists succeed in gaining power in France and Italy, the future of the euro will be in their hands. Institutionally, the eurozone will be in a similar position to now. The most important governance reform agreed during the last crisis - the European Stability Mechanism - requires unanimous support from all its member states before it can disburse bailout money.

If Mr Salvini and Ms Le Pen are ever in charge, they will have the power of veto. What has changed is that they are no longer threatening to leave. They have become smarter. But they can be at least as dangerous inside the tent.