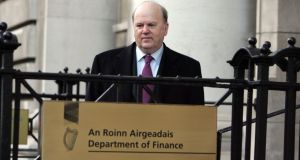 Ireland’s general government deficit was 7.2 per cent of gross domestic product (GDP) last year, inside the troika-agreed target of 7.5 per cent.

Official figures from the Central Statistics Office (CSO) put the deficit - the difference between what the Government takes in and what it spends - at €11.78 billion for 2013.

The final figure for the year represents an improvement on the 2012 position, which was €13.44 billion or 8.2 per cent of GDP.

It was also slightly better than the 7.3 per cent forecast by the Department of Finance at budget time.

The Government’s deficit position was bolstered by the inclusion of an annual preference share dividend of €280 million from State-owned Allied Irish Bank, paid in ordinary shares, which was allowed to be recorded as an equity acquisition for the first time.

Under the terms of the bailout, the Government has agreed to bring down the deficit to 5.1 per cent of GDP this year and to 3 per cent in 2015.

The department will publish its own economic and fiscal forecasts for the coming year today.

Taxes and social contributions formed by far the largest component of revenue over the period, representing just under 88 per cent of total government revenue in 2013.

Social benefits accounted for just over 40 per cent of Government spending in 2012 and 2013.

The Government’s debt position was marginally better than the department’s forecast of 124.1 per cent.

This was because of a decision by the National Treasury Management Agency to buy back a €4 billion tranche of short-term bonds earlier than scheduled.

However, the benefit of this was largely erased by worse-than-expected year-end GDP figures which inflated the debt-to-GDP ratio.

The Government’s net debt for 2013, a figure obtained by deducting the value of financial assets from the gross debt figure, amounted to €161 billion or 98.3 per cent of GDP.

Commenting on the figures, Minister for Finance Michael Noonan said stable public finances were a necessary pre-condition for economic growth and job creation.

“2013 is the third consecutive year that Ireland has performed ahead of target and, as outlined in the Medium Term Economic Strategy, the Government is committed to reducing the deficit to below 3 per cent by 2015. Today’s statistics highlight the progress that has been made in restoring order to the public finances.”

“These savings have been implemented in as growth-and-jobs-friendly-manner as possible and it is particularly encouraging that this progress coincides with job creation of 61,000 over the course of 2013.”

A separate set of CSO figures indicated the Government’s deficit for the final quarter of 2013 was €2.3 billion or 5.7 per cent of GDP.

In the corresponding quarter of 2012, the deficit had amounted to €2.5 billion or 6.2 per cent of quarterly GDP.

Government revenue for the period at €16.4 billion was higher than the €16 billion recorded in final quarter of 2012 due to increased revenue from taxes, social contributions and investment income offset by decreases in other revenue, the CSO said.

1 Money matters: ‘My father embarrassed us with his haggling’
2 Opioid executive admits to ‘no morals’ ahead of prison term
3 NI house builder apologises to Harry and Meghan over adverts
4 Pilita Clark: When a rude boss keeps you waiting, why not walk out?
5 Blueface sold to Comcast, Dublin offices for sale, and NI builder’s royal blunder
6 Comcast acquires Irish cloud-based telco Blueface
7 Are there annual limits on inheritances or gifts to a child?
8 Little strategic thinking in election manifestos of Fine Gael and Fianna Fáil
9 US threatens retaliation against EU over proposed carbon tax
10 UK’s Henderson Park to seek €400m-plus for five prime Dubin office blocks
Real news has value SUBSCRIBE